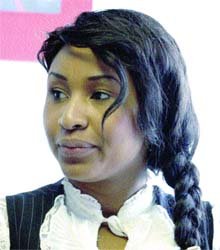 Zimbabwean Big Brother Stargame housemate Maneta Mazanhi, who sneaked into the country from South Africa last Friday, opened up yesterday and described her relationship with Rockford “Roki” Josphats as “cordial”.

The 21-year-old Bulawayo-born young lady and the popular urban groover Roki were booted out of the 91-day reality show after a sensational altercation that shattered their dreams of landing the US$300 000 up for grabs.

Maneta told The Herald that she regarded Roki as a brother not a competitor.

“As far as I know you cannot treat everyone in the house the same and I loved Roki like a brother to me and I wouldn’t say I hated him but the relationship was cordial and I appreciated him as a counterpart. We were both representing Zimbabwe and we spoke the same language,” she said.

On why they bickered and bad-mouthed each other while in the house, Maneta said it was normal for people who live in a confined area to argue.

“That is common when people are living in a confined area and there is so much pressure that comes with it. At times things would get out of hand not because that is what you want but because at the time that was the right thing to do,” she said.

Maneta said when she got into the house she didn’t have a strategy and just lived for the day, a situation that probably could have made her stay in the house difficult.

“Well, whatever you saw in the house was real that was me and because Big Brother is a game I would change the strategy as I go in other words, I didn’t have any strategy because I took each day as it came,” she said.

Asked how she would fare in the game if she were to be given another chance, Maneta said she would probably stay longer and possibly win the prize. “Of course, I would love to go back into the house and I would do more to market Zimbabwe,” she said.

She, ironically, had no kind words for her country in the house. She, however, apologised to Zimbabweans for her poor showing.

“I would like to say I went into the house first as Maneta and as a Zimbabwean representing my country. I am sorry to Roki and the nation at large. I am not a bad person, but it is up to people to see me differently because they are entitled to their opinions,” she said.

Although Big Brother Africa fans, expected the two housemates to arrive on the same day, Maneta arrived a day later following a request by her family, who feared a serious backlash from angry fans rooting for Roki.

“I came on Friday aboard South African Airways around 6pm. I was advised that I needed to sneak into the country quietly because people were literally baying for my blood,” she explained. Maneta said her comments about Zimbabwe and other reports attributed to her were taken out of context.

“The truth is my family felt I was being accused of things that I never said or misquoted. In most cases I would say these things against Roki during arguments.

“I didn’t mean it. In other instances people failed to differentiate between a joke and fact. When I talked about Zimra being corrupt I didn’t mean everyone just like what you see at any institution there are one or two rotten apples.

“I remember when I said Roki was uneducated most people who didn’t hear the whole conversation thought I had said all Zimbabweans are not educated. It is unfortunate that I was misinterpreted and misunderstood in the house,” she said.

Maneta denied reports that she claimed to be dating Wicknell Chivayo, a Harare businessman. “I have never heard of Wicknell Chivayo, infact I only got to know about him through the Press. My boyfriend who is Zimbabwean was also shocked to learn about the news,” she said.

Maneta says she will now focus on her studies. “I was studying corporate law with Unisa before going into the house so that’s my next move but I am not sure whether I will be staying in Harare or Bulawayo,” she said.

All set for ‘Tuku’s Last Gig’ in Zimbabwe