A Mbare bred granny, who stole the show at Seh Calaz’s recent birthday bash, says she cannot do without booze and live music. 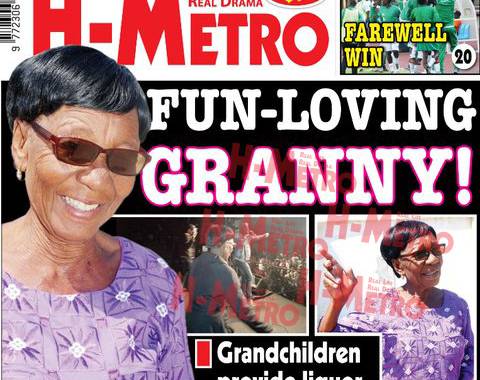 Gogo Sizani Mwelase, 79, says she has always been jovial during her childhood and dancing remains her first love.

So passionate of dancing is Gogo Mwelase that she can dance to any genre, including Zim dancehall perceived to be a preserve for young rascals and hotheads.

The ageless drama queen of Mbare says she learns some of her dancing routines from her grandchildren.

Moira Knight aims to revive her own music career with new…

She claims she has 69 grandchildren from 17 children – 13 girls and four boys.

Gogo Mwelase says she gets her supply of booze from the grandchild which keeps her ‘high’ and ready to put on her dancing shoes whenever she hears music being played.

In an interview with H-Metro at her Mbare home, she opened up on why she appeared on stage and danced merrily to Ngoni Kambarami’s performance at Mbare Netball Complex.

“My real name is Sizani Mwelase and I am 79 years old turning 80 this year in the month of October.

“I am a mother of 17 children, 13 are girls and the other four being boys.

She said she did not enjoy much of her childhood known is vernacular as kusatamba humhandara.

“Growing up, I never had a chance to go out or having fun at all; I never got the opportunity to do so.

“More to that, I got married at an earlier age. I had my first born child when I was just 20 years.

“I was married to a Catholic family so I never got to have fun.

“So I never went to any gig during my single life and even after I was married.

“Going out for gigs like this I started it recently through my grandchildren, who take me out for parties and drinks.”

“Whenever my grandchildren from London come to visit me, they take me out to have fun and also for drinks (beers).

“My grandchildren love to see me happy, on the day of She Calaz birthday celebration they were the ones who took me there.”

One of her grandchildren, who was following the interview, said their granny loves merry-making.

“Gogo really likes having fun, you should have seen her joyful mood the day she was supposed to go for Calaz birthday bash, and she was overexcited,” said one of her grandchildren.

“Gogo is a free spirit,” interjected one of the residents who bulldozed our interview.

However, the interview was disrupted by some of her grandchildren who demanded money from H-Metro for her to continue with the interview.

“We can’t let gogo continue with the interview if you are not going to pay her or give her something.

“You are the ones who will be benefiting at the expense of gogo Mwelase.

“The story will sell your newspaper and we will not get anything.

“When you published that story OK Supermarket invited her to dance and gave her money so we expect you to do the same to her,” ranted one of the grandchildren. H-Metro

“His dogs ate my chicken”