The state owned Herald newspaper has been hammered for a disgusting article mocking popular comedian Samantha “Gonyeti” Kureya over her abduction on the 21st of August 2019. The article titled “Has comedienne’s case mojo Gone Yet?” accused Gonyeti of stage managing the abduction.

Kureya, popularly known as Gonyeti, was abducted from her Mufakose home by a group of masked gunmen. She was dragged from her home half-naked and her abductors forced her to strip naked and roll in a sewage pond before forcing her to drink the same sewage.

But in a bizarre article published 31 August, 2019, Herald journalist Nyore Madzianike wrote “there is strong suspicion that the alleged abduction on the night of August 22 (actually August 21) was stage-managed for political expediency or to raise the stock of the controversial drama queen.”

The article claims the case “could soon crumble amid reports that the comedienne and her family have not made any follow-up on police investigations into the matter.”

After insults, Gonyeti and Dhafu to battle it out in boxing… 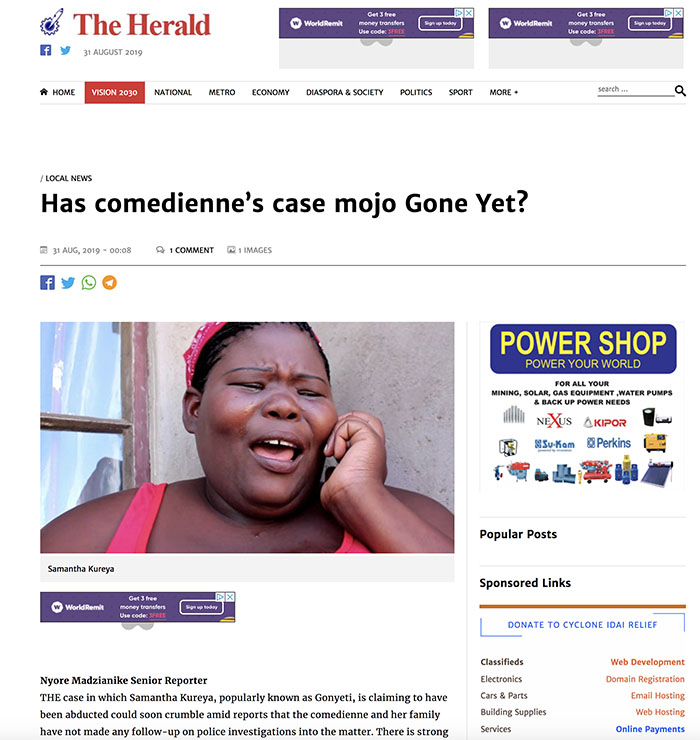 “Today the Herald in a disgusting article mocked comedienne Gonyeti, of @bustoptv. Mukoma @ShingiMunyeza, if papers owned by a group on which you are a board member continue with these dishonourable attacks, it will be difficult for the citizen to separate your views from theirs

“What I find shocking is that respectable members of the PAC like @ShingiMunyeza who is also a Zimpapers board member, spend time trying to fix Zim’s relationship with the rest of the world, yet on another end, the regime’s poisonous State media led by Zimpapers churns out poison!”

Below is the interaction

3. 2day the Herald in a disgusting article mocked comedienne Gonyeti, of @bustoptv. Mukoma @ShingiMunyeza, if papers owned by a group on which you are a board member continue with these dishonourable attacks, it will be difficult for the citizen to separate your views from theirs pic.twitter.com/IWtqMOzRgG

I’m not persuaded by public opinion.Whatever I do is because of my own personal convictions. I neither seek public accolades,affirmations or rewards. No one owns me except Christ, yet I belong to everyone. I serve to please noone except God. Let me mourn my dad in peace God bless

I am sorry that I disturbed you Mukoma, my point is not about public opinion, but about principle of right & wrong! It is morally decadent that a national newspaper would mount a campaign against a defenceless woman like Gonyeti. Those who genuinely signed up to Christ MUST speak

I always speak where my convictions are concerned. I refuse to be told what to speak on. I’m giving you the respect in responding to you because of our relationship otherwise I’m muting such conversations. Let me get back to attend to what’s important to me. God bless.

I consider you a brother & friend too, that is why I chose to bring this horrible behaviour by the Herald to your attention. Merely bcoz you are a board member there. Thank you for responding, your views are duly noted!

Herald has been ubused from time immemorial. The minority rule abused it, RGM followed now its Dambudzo. The first page of @HeraldZimbabwe is meant for vile & Propaganda of ZANU until amen. Japanese PM told them to Reform but they will twist his words to suit there narrative

As is widely blvd these guys are in it for the $$$ n business interests not evri zimbo as ey claim,I didn’t know pastor is a board member there,@ZimpapersI is the worst hate msg propagator,ey lie, defame and use hate speech against opponents day in day out!

After insults, Gonyeti and Dhafu to battle it out in boxing ring for charity

Shingi Munyeza admits to cheating on wife after daughter exposes him