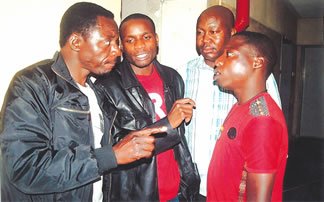 Alick Macheso’s dancer, Peter Kagomera (24) yesterday appeared before a Chitungwiza magistrate for allegedly biting a police officer who wanted to arrest him for being drunk, violent and disorderly.

The energetic dancer, who failed to travel with the Orchestra Mberikwazvo to South Africa where Macheso was holding a string of shows, appeared before Chitungwiza magistrate Ms Barbra Chimboza.

Kagomera admitted to snatching a beer bottle from one of the revellers at Chillers Bottle Store and dropping it to the ground. But he denied two other counts of resisting arrest and assaulting a police officer.

Ms Chimboza remanded him in custody to July 5 for trial. Prosecutor Mr Luke Mutupe said Kagomera was not a proper bail candidate because he showed some signs of being rebellious by fighting a police officer and being drunk.

Mr Mutupe said he was likely to abscond court.

The court heard that on June 30 this year, at Murisa Business Centre, Seke, at 11pm, Kagomera had one too many at Chillers Bottle Store veranda where he snatched a beer bottle from another patron, Tobias Gadzira (24).

After that he smashed the bottle on the ground and when Constables Rutendo Marowero and Blessing Mutare saw the commotion while on duty, they arrested him. Kagomera became violent and bit Constable Marowero on the right hand elbow and on the left middle finger.

After inflicting the injuries, he took to his heels before arming himself with stones. When the officers chased him, he threw the stones at them, hitting Gadzira on the head. Kagomera ran away, but the police officers launched a search and re-arrested him at Gombe-Chaitezvi Village the same night.