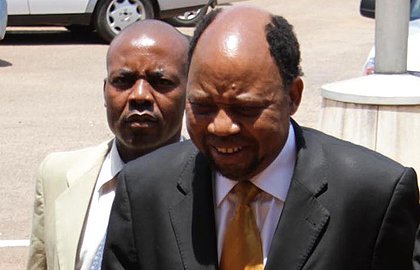 Former Intermarket Holdings Limited chief executive Nicholas Vingirai who was facing 11 counts of theft and two of externalisation involving US$300 000, R1 500 000 and Z$5 216 727 was freed yesterday.

Vingirai was accused of using depositors’ funds for his own benefit or for the benefit of companies in which he had interests. Regional magistrate Mr Hosea Mujaya granted an application for refusal of further remand.

Earlier the State sought to postpone the trial arguing that the documents whose authenticity was being challenged by the defence will be available on Friday. The defence did not want the State to produce photocopied documents insisting to see the originals.

Prosecutor Mr Michael Reza led evidence from the investigating officer Detective Inspector Charles Chirove who said the documents will be available on Friday.

Through his lawyer, Advocate Isiah Mureriwa, Vingirai argued that the evidence to be used in his case was not in the hands of the police and the documents’ authenticity was under scrutiny.

Mureriwa said his client’s right to a fair trial within a reasonable time was being infringed upon and urged the court not to be used and abused by the State. Mr Mujaya concurred with the State saying it was evident that the prosecution needed more time to prepare hence it should proceed by way of summons when it is ready.

The State says Vingirai was responsible for investing funds into the financial institution’s subsidiaries that had their own separate management.

He allegedly connived with one of the signatories, Itayi Tandi and withdrew substantial amounts of Zimbabwean dollars from the subsidiaries’ accounts and bought foreign currency, which they later converted to their personal use.

It is alleged that on August 28, 2003, Vingirai allegedly issued a cheque valued at Z$570 000 000 drawn from the Intermarket Private Bank towards First Bank Corporation Ltd for the purchase of US$100 000. The funds were later exported to Citibank London via Intermarket Banking Corporation Zambia without the authority of the Reserve Bank of Zimbabwe.

It is further alleged that on September 6 the same year, Vingirai issued a cheque valued at Z$630 000 000 drawn from the Private Bank account to Remo Stockbrokers.

The funds were reportedly channelled through Coppleridge to Century Bank where US$200 000 was purchased and later transferred to Intermarket Discount House in Zambia.

It is alleged US$100 000 was later credited into Vingirai’s personal account while the remainder was transferred into his account in the United Kingdom without authority from the central bank.

The State also says on September 9, Vingirai issued a cheque worth Z$20 million to Micro-warehouse as a commission to Jivan who had facilitated the sell of foreign currency from First Bank in August.

On November 19, Vingirai again issued a cheque worth Z$1 930 934 to the Zimra Commissioner-General for the purchase of vehicles imported by Investment Cars, which had nothing to do with Intermarket Holdings.

The court further heard that on December 17, Vingirai paid Z$8 490 270 to Zimra as duty for the imported vehicles. He also paid for a house in Greystone Park on behalf of Frank Buyanga, the court heard.

In August the same year, Vingirai allegedly exported US$300 000 to Citibank through Intermarket Discount House in Zambia without the authority of the RBZ. The following month, he exported R1 500 000 to Andrew Weir and Company’s account at Royal Bank of Scotland.

Vingirai fled the country in early 2004 in the wake of a sector-wide banking crisis that claimed his Intermarket Banking Corporation, Intermarket Discount House and Intermarket Building Society.

He was the owner of Transnational Corporation, an investment vehicle through which he owned IHL, whose building society was among the top three mortgage lenders in the country.

‘Makandiwa can save struggling companies’