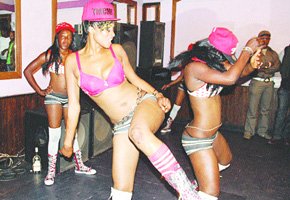 A male reveller stole the show on Friday night after stripping naked while on stage as a way to prove his manhood to Bev and the Sexy Angels during their show held at Basement Night Club.

The man’s behaviour stunned the usually calm Bev, who ran off stage before the lights in the venue were dimmed and the man was carried off by a troop of security guards and police officers only to be released later.

The man, who seemed intoxicated, was on stage during one of Bev’s dance routines where she requests a male reveller to come on stage and prove his manhood.

After being laid down on the stage and subjected to Bev’s renowned gyrations and stripped bit by bit, the man shocked all and sundry when he stood up and removed his boxers which were the only item of clothing that he was left with.

Some in the crowd cheered the man on while others shouted abuse at him demanding that he step down from the stage as he had chased away the night’s main attraction.

The much anticipated bottle dance lived to its billing as after the male stripping incident she was back, Viceroy bottle in hand, which left the crowd with little doubt of what was to come as the tiny club erupted with shouts from the crowd which was going wild with anticipation.

As usual the act did not disappoint as Bev got the crowd on the edge of their seats by letting the bottle enter her, drawing further jubilation from the expectant crowd.

Before that, the raunchy performer had done a similar act by taking a beer bottle that belonged to a male reveller. As it entered her amid frenzied cheers from the crowd, she handed the bottle back to the man and he drank the contents.

In what was her second performance in the City of Kings in as many months Bev kept the crowd transfixed as they were captivated by part of the show titled Bev vs the Sexy Angels.

Before the night’s main course, Bev herself, the crowd were first appetised by the performance of the waist gyrating trio of Chantel Dlamini, Mercy Makumire and a new recruit only known as Heather, who got the crowd going with sexually suggestive dance moves which captured the attention of the mostly male revellers who were present at the performance.

This was before the lady of the Bev herself joined the Sexy Angels on stage at about 11pm and warmed up the crowd with her gravity defying dance moves, which seemed beyond the capabilities of a normal human body.

The show recorded an increase in the number of female revellers who were part of the about 200 people present at the venue. A female reveller who preferred to remain anonymous said she and her friends attended the show to see for themselves what grabbed the attention of their male counterparts.

“We wanted to see what this Beverly was all about, because she seems to have stolen the hearts of many men in the city. I must say she is giving what men want. Bev has however taken what we do at kitchen tea parties and exposed it to the world,” she said.

Another man who also wished his identity be kept secret said that they had not been disappointed by Bev’s performance, but were inconvenienced by the crowded venue, which saw people straining their necks to catch a glimpse of her performance.

“It was a great show, but we could not see everything, as those near the stage obstructed the view of those at the back, while we were pushing and shoving each other to get a better view. The Chronicle