Critical Race Theory- What I have taught my three black children!

Attorney Derrick Bell went to Harvard in 1969 and was the first Black to achieve a tenured professorship three years later. Prior, he worked with the National Association for the Advancement of Colored Peoples (NAACP) and was involved in 300 school desegregation cases.

Despite all the legal impediments, to black advancement having been removed, and affirmative action put in place to help speed integration, he became disillusioned with the slow success of these programs. Blacks remained at the bottom of the ladder and suffered serious disadvantages.

In 1992 he left Harvard in protest when two professors of color were denied tenure. He came to a harsh conclusion, that the legacy of slavery, segregation and the historical reality of second-class citizenship for Black Americans continue to prejudice the decisions of decision makers, consciously or unconsciously. In short race prejudice permeates American society.

This idea, to Bell’s disciples like Kimberle Crenshaw is now a religion. Race incidents such as the Rodney King and George Floyd incidents are not aberrations, but part of systemic racism embedded in the American psyche.  These disciples add that these incidents are reflective of a racist society, and that these behaviors are embedded in law, social structures and public policy.

Letter from America: Ukraine policies show the urgency of…

Letter from America with Ken Mufuka: The end of the Zee…

Letter from America: The killing of Brother Arbery showcases…

Letter from America: De Klerk’s death bed confession, is he…

Letter from America: Will Mugabe’s dead body cause…

These missionaries argue that the system is irredeemable and rotten to the core and imply that its continued existence destroys any hope for people of color. Those who deny such an assertion are said to be Uncle Toms (if Black) or simply “race deniers” if white.

This is where moderate thinkers part ways with the race theorists.

There are two areas of disagreement. Black liberation leaders and philosophers believed that America can be called to a higher purpose which is stipulated in its constitution. Secondly, African American leaders preached the gospel of love, for country and for their tormentors. This we shall refer to later in the essay.

CRT theory, introduced at an early age, in kindergarten or in high school may arrest the development of children’s adjustment to live in a diverse society by giving the impression to black kids that every white man round the corner wishes them harm.

Introducing children in kindergarten to this gruesome story will disrupt their spiritual growth, balance and ability to build nonracial social relationships

Every family has skeletons in its closets, but there is a time and place when these skeletons are revealed to members. It is not that we want to hide the gruesome truth about slavery.

We are asserting that prematurely introduced to immature minds, the subject can disrupt the proper growth and balance of children. Childhood should be as happy and as comfortable as possible, in order to build up resources required for adult efforts.

Elizabeth told Mrs. Lincoln that her former master, finding himself in debt, took Little Joe, the cook’s son and sold him. In preparation for the sale, “Joe’s mother was ordered to dress him in his best Sunday clothes and send him to the house, where he was sold, like the hogs, at so much per pound. (She) pleaded piteously that her boy be not taken from her; but master quieted her by saying that he was going to town with the wagon.” 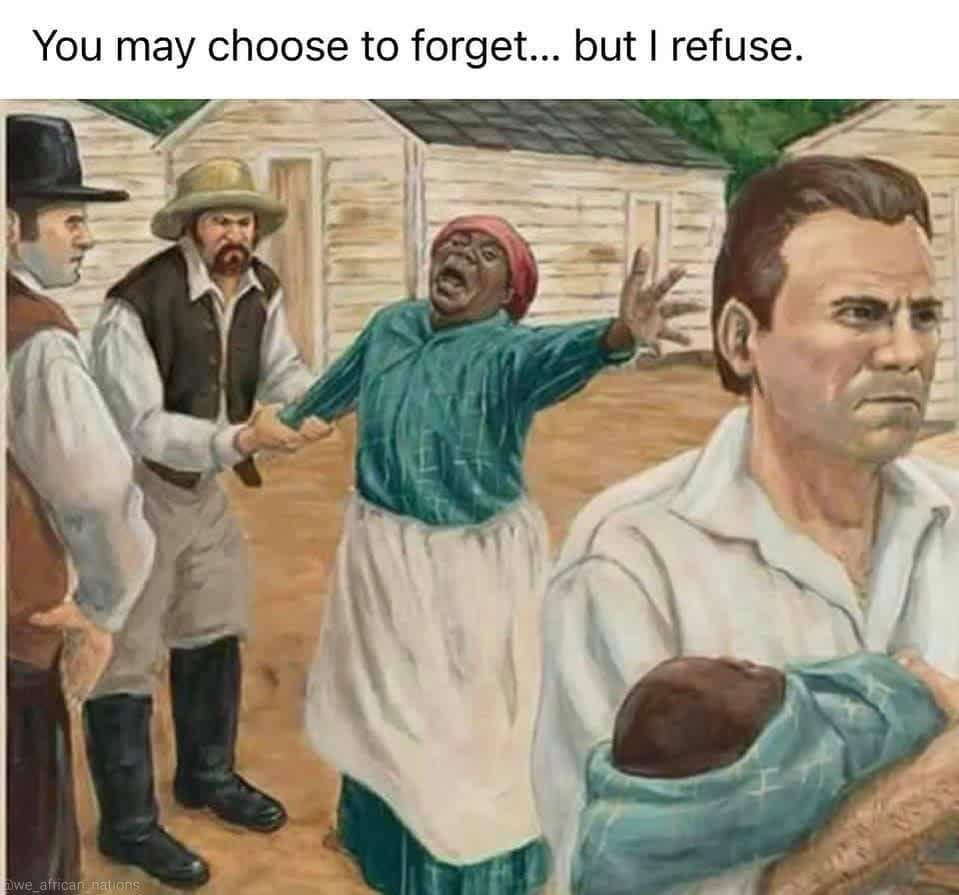 The mother grieved to death and the rest of her life became gloomy over the loss of her son.

“Morning came, but little Joe did not return to his mother. Morning after morning passed, and the mother went down to the grave without ever seeing her child again. One day she was whipped for grieving for her lost boy…. Burwell never liked to see his slaves wear a sorrowful face, and those who offended in this way were always punished.”

The cruelty in this story is self-explanatory. Discretion is the better part of valor. Such a gruesome story is unsuitable for kindergarteners.

There are other reasons why such a subject should be left to the universities. As mentioned earlier, CRT asserts that American society, derived from a slave background cannot be redeemed. This attitude flies in the face of evidence to the contrary.

Despite drawbacks, the story of civil rights is that the US has gone further than any other nation in the direction of equality among its citizens.

Further, to argue that all white people are racists betrays the sacrifices of the many whites who supported Martin Luther King and Mary Mcleod Bethune. A cursory look at the photographs of the March on Washington reveals that many of the participants, if not a majority, were white. In the recent Black Lives Matter protests, during Donald Trump’s presidency 2016-2020, by far most Black Lives Matter protesters were white.

In any case, the argument contradicts common sense and wisdom. If indeed the majority were racist and beyond redemption, it defeats common purpose to call upon the same constituency to repent, turn around, divorce themselves from their natural state of racism and hope that they will become champions for the advancement of colored peoples.

From the earliest abolitionists, Frederick Douglass and William Garrison to the later day civil rights leaders like Bethune and Dr. King, there was a firm belief that the heart and soul of the American people was not entirely wicked and irredeemable. It was necessary, however, to show them a mirror to their deeds, and once awakened, slavery and Jim Crow was a thing of the past.

Douglas wrote to Garrison (October 27, 1844) that their work as abolitionists was the “enlightenment of the public mind, the quickening and enlightening of the dead conscience of the nation into life, and to a sense of the gross injustice, fraud, wrong and inhumanity of enslaving their fellow men, the fixing in the soul of the nation an invincible abhorrence of the whole system of slaveholding.”

The British Anti-Slavery Association (1787) used as its motto these words: “Am I not a man and a brother!” The British Women’s anti-slavery movement, whose leading writer was Hannah Moore, adopted a similar motto: “Am I not a woman and a sister?”  The names behind this submission to parliament included admirers of Phillis Wheatley, the African American poetess. In an earlier poem, entitled the “Female Advocate” their admiration of Wheatley was unbounded.

Led by the Chatham Sect, it became fashionable among English ladies to drink unsweetened tea as they enjoyed gossipy high teas. This was to protest West Indian slave produced sugar.

Even in the darkest hour of rejection, Bethune wrote in 1955 of a hopeful future. “I leave you hope,” she said. “Yesterday our ancestors endured the degradation of slavery, yet they retained their dignity. Today, we direct our strength toward winning a more abundant and secure life. Tomorrow, a new (African American), unhindered by race taboos and shackles will benefit from more than 330 years of struggle. Theirs will be a better world. This I believe in my heart.”

In the same vein, Dr. King (August 1963) repeated the same argument of hope. “We refuse to believe that there are insufficient funds in the great vaults of opportunity of this nation. So, we have come to cash this check, a check that will give us upon demand the riches of freedom and security of justice.”

Our disagreement with the 1619 project lies in the fact that it leaves no hope for our children. It condemns all white people as either active or benign racists and thus destroys that coalition of all “men of goodwill” (King) which is necessary to achieve the American dream.

My experience is that any white man today who holds any position of trust would be a very foolish man to say anything or behave in a manner that can be interpreted as racist, even if it were a slip of the tongue. Many years ago, I was involved with refugees from New Orleans hurricane.

A white woman in South Carolina said their miserable condition reminded her of “yard apes.” When the college which employed her was asked to make comments, the spokesperson said that the person involved with that remark was no longer associated with the college.

Therefore, our problem as blacks is not with racists daily. My bad experiences came from encounters with white professors who so loved and felt sorry for the black race that they made excuses for any kind of behavior or accepted excuses for missed homework.

My simple rule of thumb was to ask the question. “Do you accept this behavior of your own children?” If the answer is “No” then the behavior should not be accepted of my children.

Booker T. Washington laid down the rule at Tuskegee that any black student who was polite, diligent, law abiding, responsible and in any way showed competence in whatever task he was supposed to carry out, would not for long be ignored by society.

For my three children, I have would add that such a black kid has a tremendous advantage over a white kid because American white society is everywhere seeking to make a showcase of having put their dark past of racism behind.

Letter from America with Ken Mufuka: The end of the Zee dollar is near, say I!

Letter from America: The killing of Brother Arbery showcases the rotten side of US…

Who has destroyed the Zimbabwe dollar? Reply to Dr. Tim Rainhard – Letter from…

Letter from America: Will Mugabe’s dead body cause Mnangagwa’s downfall?