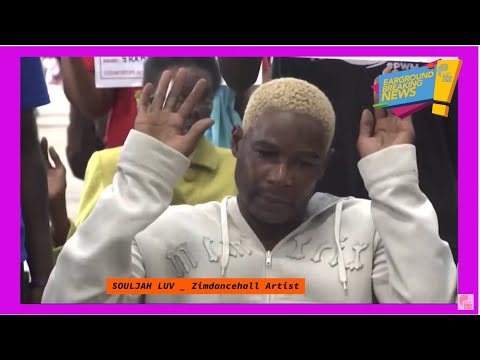 Controversial Zimdancehall artist Soul Jah Love, real name Soul Musaka, was about to take his own life before turning to Prophetic Healing and Deliverance (PHD) Ministries founder prophet Walter Magaya for assistance, it has emerged.

During deliverance time on Sunday (yesterday) at his giant Harare tabernacle, Magaya identified Jah Love in the prayer line and acknowledged him by claiming he had healed his leg before.

Magaya then enquired what had now brought the renowned Zimdancehall singer to PHD Ministries.

“He came here and I healed his leg.

“What is happening? Why is he here?’’ Magaya asked.

In a video shared by Earground News on Facebook, a man claiming to be his brother and was beside him in the prayer line narrated to Prophet Magaya how Jah Love had gone back to drugs, adding he had now turned violent, an attitude that tended to tear apart his life.

“He became dehydrated from not eating well.

“We took him to the doctor.

“He knows he is diabetic but is not controlling his eating habits, and now appears to have given up on life.

“He is turning violent and damaging property, destroying everything around him,” said the man who said he was his brother.

Jah Love is not a stranger at the PHD Ministries.

In 2016, his festering leg allegedly got healed after Magaya prayed for him.

Then, the Zimdancehall icon was wheelchair bound, forcing him to perform to his multitude of enthusiasts while seated.

Jah Love’s ex-wife, Bounty Lisa, who suffered a growth on her thigh, also sought help from the man of the cloth, having been witness to her former husband’s alleged healing by Magaya.

“Besides encouraging the sick to visit hospitals when in need of treatment, I must confess that Jah Love’s healing in the hands of Prophet Magaya gave me a second thought about the power of God to heal the sick,” Lisa said.

In 2018, Jah Love was denied a United Kingdom visa to perform at a music concert over a huge outstanding medical bill he owed a UK-based medical facility, the National Health Service. Nehanda Radio