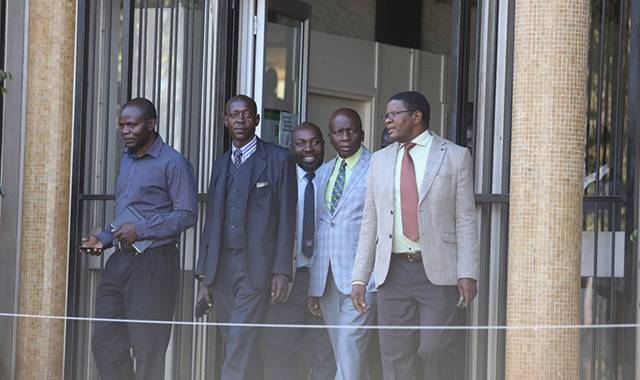 The trial of three senior Zimbabwe Prison and Correctional Services (ZPCS) officers who are accused of engaging in a chicken project with jailed former senior Reserve Bank of Zimbabwe official Munyaradzi Kereke failed to start yesterday.

Prosecuting Ephraim Zinyandu said he required time to check if the said documents were in existence.

Provincial magistrate Maturure castigated both counsels for failing to serve each other with all the relevant papers only to seek them on the trial date.

The new trial date was set to September 2.

Allegations are that the three men also gave preferential treatment to Kereke in the form of allowing unscheduled visits from his relatives, enjoying extra free time compared to other prisoners and not allowing him to carry out any manual work in terms of set-out procedures.

It is further alleged that Chomurenga (58), Chiparausha (43) and Mutiwaringa (56) are that from September 25 to August 2018, Chomurenga was the officer-in-charge at Chikurubi Maximum Prison being deputised by Mutiwaringa, while Chiparausha was the head of security.

After Kereke was convicted and sentenced to 10 years in July 2016, he was committed to Chikurubi Maximum Prison under prison number 594/16 where he then met the three top prison officers.

On September 25, 2017, it is alleged Chomurenga and Chiparausha, who were acting in connivance with Mutiwaringa, in their personal capacities, entered into a memorandum of understanding with Humanity Earth Trust.

Prosecutors said the manner in which the contract was signed was inconsistent with how ZPCS enters into contracts and it was unknown to ZPCS commissioner-general Paradzai Zimondi.

They said during the period extending from September 25, 2017 to August 2018, Humanity Earth Trust provided a total of 3 000 birds, feed, medication and other sanitary requirements for the chicken-rearing project.

The three accused, as part of the agreement, provided space and labour in the form of prisoners, but for their personal benefit.
When the chickens were being sold, the customers paid money into Chiparausha’s EcoCash number 0773 834 712 and in the end his account was credited with a total of $8 282.

In December 2017, Mutiwaringa, who took over as officer-in-charge after the promotion and transfer of Chomurenga, received $2 252 from Chiparausha through his EcoCash number 0772812662 being project proceeds. H-Metro