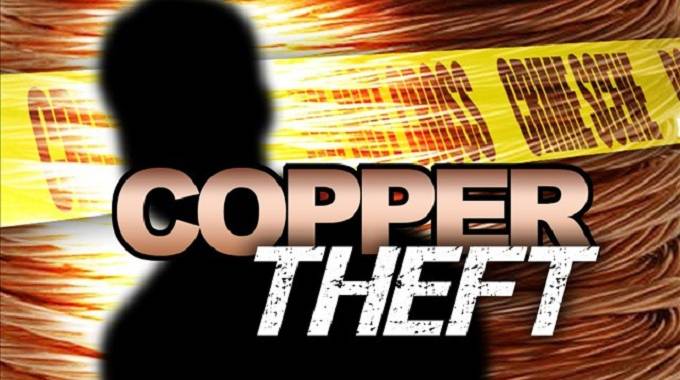 Police were left twiddling their thumbs, after daring thieves vandalised and stole copper cables from right under their noses. Police have since registered a case and are carrying out investigations.

The thieves stole copper cables from poles behind Ntabazinduna Police Training Depot, affecting some parts of the area as well as in Mbembesi.

“They stole copper cables from seven poles about two months ago and some parts of Ntabazinduna and Mbembesi have been affected,” she said.

TelOne and the National Railways of Zimbabwe (NRZ) to deliberate on measures to reduce cases of vandalism and theft of copper cables.

“We held a joint meeting about a fortnight ago with concerned stakeholders to deliberate on measures to take on preventing any further vandalism and theft of copper cables.

“During the meeting it was discussed that the Government was tirelessly and frantically working towards preventing further theft.

“It was also during the meeting that we noted that the justice system should impose higher penalties on perpetrators. Other organisations such as TelOne have considered installing alarm systems to act as a deterrent to criminals,” said Chief Insp Makonese.

She said it was also agreed to involve copper dealers in the fight against copper cable thefts.

“Theft of copper cables has a harsh effect on many systems. These thieves are not aware that this infrastructure was placed to develop the country and sets the country back by stealing cables.

“Hospitals and lives are lost due to this, schools are affected, agriculture in terms of irrigation. Therefore we have come to terms with responsible stakeholders to have sporadic deployments and patrols in areas prone to vandalism and theft. We will also be conducting mandatory searches on vehicles at roadblocks,” added Chief Insp Makonese. Sunday News