The MDC Bulawayo Province Youth Assembly registers its displeasure and disgust at the disruption through violence of parliamentary outreach meetings on electoral reforms in Bulawayo and other parts of the country recently by ZANU PF youths. 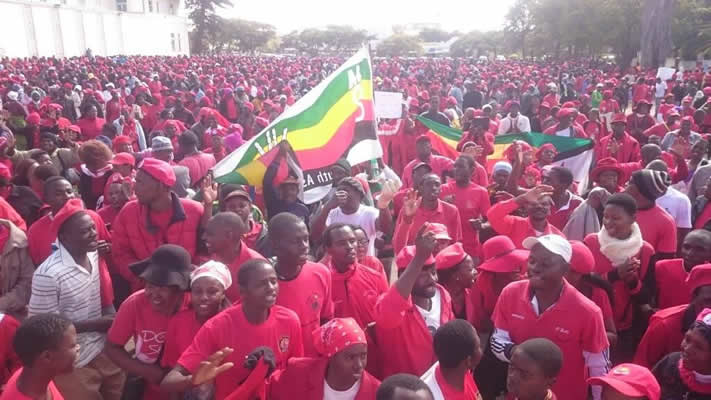 These tactics to try and silence the masses are barbaric, archaic and totally unacceptable. We are aware of the plot borne of the regime’s psychotic terror of electoral reforms to reduce these important outreach meetings into a fruitless exercise.

As the MDC youths of Bulawayo we demand that the aborted outreach meeting for Bulawayo be rescheduled so that we have our opportunity as citizens to contribute meaningfully to the process of electoral reforms without disruptions.

We believe that these acts are perpetrated by enemies of democracy who will shamelessly stoop to any level in a desperate bid to maintain their indecent and self-servicing stranglehold on the seat of power.

Such attempts to mutilate and dilute of the Electoral Act, constitution and loud calls by the masses for the implementation of electoral reforms will not work this time around. It is clear that ZANU PF, having sensed defeat in the next general election will try all in its power to try and kill the letter and spirit of the realignment and implementation of electoral reforms.

These parliamentary outreach meetings ought to be accorded the utmost respect by all citizens as they provide a platform for the electorate to contribute towards the law making process on electoral reforms.

As such, we the MDC youths view all attempts to disrupt or obstruct this process as going against the basic tenants of democracy upon which such processes are founded. These barbaric acts certainly do not serve the collective interests of Zimbabweans who have for too long been short-changed by the shortcomings of an unfair electoral environment.

Therefore as the MDC Bulawayo Province Youth Assembly we would like to make it categorically clear that we are not going to sit back and watch as this barbaric trend by the failed ZANU PF regime continues.

Furthermore, we would like to remind the Zimbabwe Republic Police that their mandate comes from the national constitution and not from individuals, therefore we expect nothing short of professionalism in the manner they deal with these rogue elements.

We are not impressed with their attitude in handling these violators thus far. It is the duty of the law enforcement agents to make sure that these parliamentary outreach meetings are not disrupted and those who attempt to do so are dealt with.

The time for messing around with our future is long gone. As young people we have a greater stake in the future of this country and as such we will not tolerate any mischievous attempts to disturb democratic processes as a way of delaying the change that Zimbabweans have been waiting for.