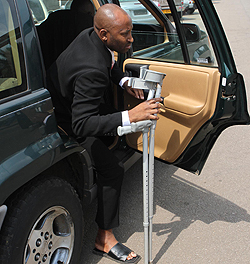 FORMER Warriors captain Peter Ndlovu had his contract with Twalumba Holdings terminated because he brought photos of naked and semi-naked women to the company’s football team training sessions and used bad language towards the technical team, a High Court Judge heard yesterday.

Twalumba Holdings owner Dr Nkululeko Sibanda said this while being led by his lawyer Mr Pardon Makuvaza in the case in which Ndlovu is claiming US$55 000 in unpaid signing on fees. The matter is being heard by Justice Mary Zimba-Dube who reserved judgment indefinitely.

Twalumba Holdings argued that Ndlovu did not sign with them as a football player, but he signed a partnership in which he agreed to develop football in the country. Dr Sibanda said Ndlovu had been hit by hard times in 2010 and the agreement was meant to help him come out of the woods.

He said Ndlovu was expected to use his brand name to be an ambassador in sporting activities in which Twalumba was involved. But Ndlovu insisted that he is owed US$55 000 after signing for Twalumba as a player for Highfield United. Ndlovu’s lawyer Mr Harrison Nkomo objected to the claims that he brought pornographic material to training sessions.

Dr Sibanda said he heard reports that Ndlovu brought the ponographic material to the training sessions and this was also intimated in a letter of termination of contract written to him. He said he did not want the matter to spill into the courts as he regarded Ndlovu as his brother.

During cross-examination, Mr Nkomo asked Dr Sibanda how he could loan a player he did not own and he said: “I had Peter’s playing rights. It was in my capacity of president of Highfield United and major shareholder of Twalumba that I made the directive to loan him.

“Peter had a memorandum of agreement which was signed by me in my capacity as executive chairman of Twalumba Holdings.”

Dr Sibanda maintained that Ndlovu had an agreement with Twalumba Holdings and not with Highfield United. But Mr Nkomo said to show that the contract was binding, Twalumba paid Ndlovu a salary, gave him fuel and serviced his car as well as provided him a house.

Next to give evidence in the defence case was the Zifa Northern Region administrator Andrew Javachava who said a football contract would not be valid without a timeframe. The Herald

Soldiers cause ructions in Zanu PF