Soldiers cause ructions in Zanu PF 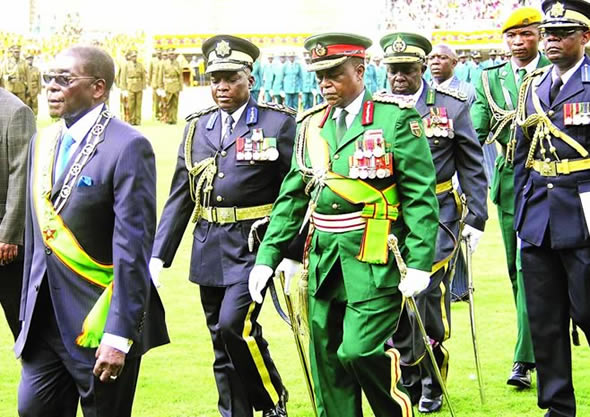 A STAMPEDE by mostly retired military personnel to represent ZANU-PF in primary polls ahead of make-or-break elections later this year has caused ructions in the party after stepping on the toes of long-serving civilian party cadres, The Financial Gazette heard this week.

The rise in the number of former soldiers keen on representing ZANU-PF in the forthcoming elections in all the 10 political provinces has caused consternation among sitting Members of Parliament and Senators who do not have military background.

Speculation is rife in ZANU-PF circles that their activities were being coordinated from within the party to give them a safe landing into politics.

The involvement of retired air vice marshal, Henry Muchena and former intelligence chief, Sydney Nyanungo in the party’s commissariat, according to ZANU-PF insiders, could make it easy for the ex-military men and women to switch trades and challenge the status quo.

Also said to be playing an instrumental role in attempts to get the former soldiers on their feet in politics is Harare South MP, Hubert Nyanhongo, who is a former lieutenant colonel. Nyanhongo retired from the army in 2001 before becoming a councillor and later MP.

While Muchena could not be reached for comment, Nyanhongo said neither him nor the retired air marshal were assisting former soldiers in their ambitions.

“We push forward the programme of the party and we don’t impose people. We don’t have that power. People come from the people.”

Nyanhongo said the former servicemen and women, just like teachers, engineers and others have a right to join politics when they do wish.

Cairo Mhandu, a retired major and ZANU-PF’s Mazowe North House of Assembly member also weighed in, saying a number of former servicemen and women have approached him to discuss their plans to participate in the forthcoming elections, adding that there was nothing in the party’s constitution that prevents them from running for Parliament.

“These are former soldiers; these are former ex-combatants. They have always been the vanguard of the party,” he said, adding that their discipline and loyalty would strengthen ZANU-PF.

ZANU-PF civilian members who spoke to The Financial Gazette expressed fear that the party could be hijacked by people who only joined its structures “yesterday”. They are also worried that the increasing influence of the former soldiers could further divide the party by alienating civilian incumbents and their supporters ahead of crucial elections.

Interestingly, the former soldiers have avoided campaigning under the Zimbabwe National Liberation War Veterans Association banner because most of them feel the umbrella body of former liberation war fighters has been hijacked by opportunists.

The onslaught by the former soldiers on sitting MPs and Senators has compounded pressure on incumbents, particularly the old guard in ZANU-PF who also face competition from the young Turks.

ZANU-PF’s rivals however, cry foul, claimimg there exists an improper alliance between the military and the party. In the past, several service chiefs have declared their open support for President Robert Mugabe’s party.

There were also reports that the army campaigned for ZANU-PF when the party was on the verge of losing power to a resurgent Movement for Democratic Change (MDC) in the 2008 general elections.

Although those in the MDC formations, including some in ZANU-PF, are uncomfortable with the former soldiers participating in politics after retiring, the situation in western countries, particularly the United States, is different.

George W Bush, the 43 rd US president, served in the army and was at one time the director of the Central Intelligence Agency (CIA), while his father George H.W Bush was the country’s 41st president who once served as America’s director of CIA and was once a lieutenant in the army.

Another former US president Ronald Reagan was a captain who served during World War II. Jimmy Carter was also a lieutenant in the US navy.

Meanwhile, MPs from all the three political formations in the inclusive government have intensified their efforts to re-claim seats in the House of Assembly.

The MDC-T, which has come under fire for shielding incumbents, last month held a strategic meeting in Nyanga where it deliberated on the upcoming elections and reviewed the calibre of candidates and criteria that the party would adopt in fielding its Parliamentary candidates.

“We want to field people who are tried and tested, who have the people’s interests at heart and will be able to take the struggle to democratise Zimbabwe to the finishing line, as we have now entered the last mile”, said an MDC-T national executive member this week who requested anonymity.

The Welshman Ncube-led MDC last month made an open call for the nomination of both MPs and councillors which will close on Thursday next week.

Nhlanhla Dube, the MDC spokesperson, said the call was meant to “provide transparency and accountability” on the party’s structures and avoid the imposition of candidates.

Saviour Kasukuwere, the Youth Development, Indigenisation and Economic Empowerment Minister and MP for Mount Darwin is also criss-crossing the country to drum up support for this party, ZANU-PF.

Rashweat Mukundu, chairperson of the Zimbabwe Democracy Institute, said the unfolding fight to win parliamentary seats could easily precipitate into festering divisions at party level in ZANU-PF and the MDC formations if it was not carefully handled.

“The fight for parliamentary seats reflects a developing political careerism and a realisation that the State is becoming a key player in resource allocation, so if you want to get rich then become an MP and a Minister. Political parties will suffer from the divisions and much will depend on the capacity of the top leadership to maintain unity,” he said.

“The fight for seats is more a fight for resources and this is defining our politics . . .even citizens are aware that you don’t support politicians for any shared ideal but because of what you get, so they will equally sell their vote to the highest bidder.”

Another school of thought reckons that the MPs’ past record under the unity government would come under scrutiny before voters backed an individual.

Those fingered in the looting of the Constitutional Development Funds run the risk of being cast into political wilderness and face an hour of reckoning during voting. Financial Gazette

Tamborinyoka returns to work after crash