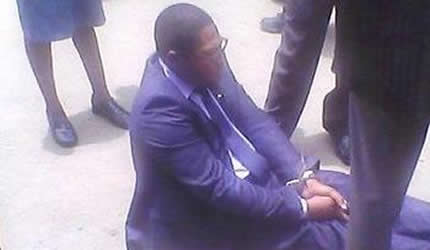 HARARE – Businessman-cum-musician Energy Mutodi was yesterday arrested at the Harare Civil Courts on allegations of swindling several home-seekers in and around the city.

Mutodi who was coming from the Civil Court where he had a pending maintenance case was spotted by a policewoman, a home-seeker he allegedly swindled. The policewoman confronted Mutodi and ordered him to explain why the housing scheme had failed to provide stands on the stipulated time.

Mutodi is alleged to have become violent. He was, however, apprehended by police details at the scene. Mutodi was taken to Harare Central Police Station for further investigations.

“We confirm that Mutodi has been questioned in a case which is currently under investigations by our Commercial Crimes Unit. More details will be released as the investigation continue,” he said.

Supt Nyathi could not divulge any other information concerning the case. Some of the civil servants who Mutodi allegedly swindled have been seeking audience with him to no avail.

On Monday this week, civil servants besieged his office at NSSA House forcing the musician to close the company. According to media reports, Mutodi once faced arrest for allegedly swindling over 200 desperate home seekers.

The former geography teacher-cum-businessman operates Zimbabwe Housing Trust (Zim-Trust) involved in housing development. He was accused of “stealing” from desperate home-seekers, most of whom are civil servants.

Mutodi has since denied the charges. Some of his customers reported him to the Commercial Crime Unit under initial report number IR120486. Zim-Trust was reported to have been selling 250 residential stands in Tynwald South but only 43 customers were allocated their stands.

Mutodi was alleged to have cheated potential home seekers out of US$200 000. In December 2011, Mutodi launched the National Association of Housing Finance Organisations, an organisation that was meant to regulate the operations of housing development trusts and protect homeseekers.

It targeted to develop at least 50 000 housing units in the next five years. The Herald