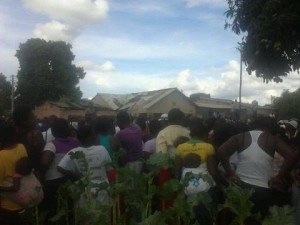 The explosion extensively damaged two houses in the high density suburb. “I can confirm there was an explosion and five people are feared dead. Police are on the ground investigating the cause of the explosion,” Charamba said.

The explosion happened at number 4 Ndororo street in Zengeza 2. The whole street was cordoned off while the police investigated the cause of the fire.

Police Inspector Badza from St Mary’s police station told London based SW Radio Africa that the blast occurred just after 3pm and killed 4 adults and one minor. He said they are yet to establish what caused the explosion that destroyed eight other houses along Mbaura street in the surburb.

“We are busy with our investigations and its still early to pinpoint the exact cause of the explosion. We have officers on the ground scurrying to the area to establish what happened,” Inspector Badza said.

Job Sikhala, the former MP for St Mary’s, said his house is about 2km from the street where the explosion took place, but it was so huge it shook his house. Sikhala said the house belonged to a tradional healer, who is known to have kept gas cylinders.

“From what I hear from people in the area, the owner of the house which was apparently obliterated by the blast, belonged to this n’anga, who is well known in the area,” Sikhala said. There were unconfirmed reports that the death toll has since risen to 8.

The more supersticious are claiming the ‘accident’ occurred after what looked like African Lightning that backfired – according to Zengeza 2 residents. Eye witnesses said a big thunder bolted before killing the sangoma and his clients as they were testing the effectiveness of the alleged lightning.

Another onlooker said: “Sha imheni yanga ichida kutumirwa. But hameno yatambika and it backfired and they mysteriously got burnt. Those who got to the scene first actually found a clay pot still boiling and human flesh was smoking. Surprisingly the walls of the house did not get burnt.”

However, there were reports that the blasting was a result of a gas stove, but another eye witness, Moses Mtombeni Ndhlovu, refuted such claims.

“It was certainly not a gas stove because there was electricity. Besides, a gas stove results in notable flames when it explodes, which was not the case in this incident. There were no flames at all,” said Moses.

He went on to explain what he claims really happened.

“There is something that exploded at the sangoma’s house. Human body parts could be seen hanging on roof tops after the explosion. Several houses were also affected, and their roofs were also destroyed. I’m not too sure what the traditional healer was ‘manufacturing’ but his charms went terribly wrong and he died too. There are reports that he was creating an artificial lightning and some say he was creating a goblin.

“There could be around 8 people who met their fate, but personally I have witnessed 2 people who died. So terrible was the mysterious blasting that some human body parts were picked up as far as 400 metres away. I stay close to the scene (in the next road), in Mbaura Street. The clay pot that the sangoma was using is still intact and it was still containing its traditional medicines when we besieged the scene,” he explained.

John Chimoto of Harare said: “Since nowadays it’s all about miracle this miracle that, I’m sure it was a miracle lightning that wanted to attack mwana weminana. Isn’t Prophet Makandiwa prophesied on New Year’s Eve that his followers shall not be attacked this year by anyone.”