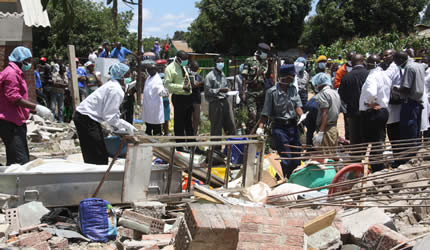 CHITUNGWIZA – An anti-tank landmine is believed to have caused the Chitungwiza blast that killed five people on Monday. Sources close to the investigations revealed that the “the nature of the damage was consistent with a landmine”.

Burial papers for the victims indicated “suspected bomb” as the cause of the death. However, police spokesperson Asst Comm Charity Charamba said investigations were continuing. “We are still investigating. We cannot confirm it was a landmine as of now. We want to exhaust all leads,” she said.

She said no arrests had been made yet. Landmines do not end with the personal, physical, or even mental trauma of an individual. They inflict societal trauma, through infrastructure and economic damage. Sources close to investigations believe the other two dead were a soldier and a police detective.

The two are believed to have brought the deadly weapon to Sekuru Shumba — Speakmore Mandere — the traditional healer who also perished in the blast. It is believed they wanted to extract red mercury, which has an attractive market in Johannesburg.

According to online sources, red mercury is a 19th-century term for protiodide or iodide of mercury. It was commonly recommended for use as an anti-syphilitic as late as 1913.

Today, it is used in some countries for skin lightening, causing some cases of nephritic syndrome. Red mercuric iodide is a poisonous, scarlet-red, odourless, tasteless powder that is insoluble in water.

According to some world media reports red mercury sells for as high as US$1,8 million per kilogramme. Remains of the five victims of the explosion were collected for burial yesterday.

First to collect the remains were the Mandere family from Centenary, followed by the Chimina family whose daughter, seven-month-old Kelly, also died. She was buried yesterday at the Unit L cemetery.

The remains of commuter omnibus operator Clever Kamudzeya were expected to be collected late afternoon. Burial is scheduled for today in Chihota. Relatives of one of the victims, Aleck Shamu, were also making arrangements to collect his body while the remains of the fifth victim were still to be identified.

He would be buried in Masvingo.

A member of the Zimbabwe National Traditional Healers Association, Mr Lovemore Muparadzi, said the blast was most likely the result of a failed attempt to address problems associated with an enrichment medicine (muti) processed using a rare animal called sandawana, which looks like a mouse.

“That explosion was not caused by lightning or goblins. It most likely happened because of a sandawana,” he said.

“Buying such muti can be dangerous because people tend not to get the full manual on how it is used. And if you do not get full details, it can backfire,” he said.

Need to bridge the gap between rhetoric and practice in Zimbabwe