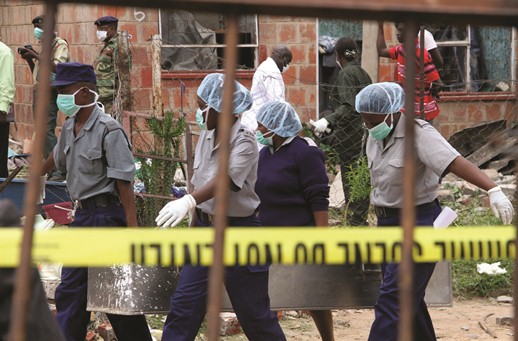 HARARE – The horrific Chitungwiza blast has claimed yet another life. Tembo Magaya, a 65-year-old has died — apparently from the effects of the explosion suspected to have been caused by a bomb and his family is in agony.

Although Magaya had been bedridden before the blast which razed three houses to the ground, he could have survived the illness. His relatives yesterday painfully relived the life of a man who was traumatised by the blast to the extent that he could not speak, eat or walk after the deadly explosion.

Magaya died on Sunday around 5 pm at Chitungwiza Hospital and his body will be buried in Mutoko, the family’s rural home. When the Daily News visited the “house of death” there was not even an indication that there was a funeral in progress.

Mystified and weary of the blast and its after effects, the Magaya family sat stone faced in the tent that was erected by the International Red Cross seemingly passive of their father’s death.

Magaya’s daughter, Tineyi, said the whole family is still traumatised by the blast that has now claimed a close member of their family. There was no wailing at the funeral nor were dirges sang but only passive faces pondering the next move under a dark cloud of uncertainty.

“He was not feeling well and we were taking care of him here since October but his condition had improved as he could walk and eat. The blast occurred when he was in the sitting room and because of his frailty he could not run away and was injured in the process,” said Tineyi.

Close family members hoped that their father would recover from the horror blast that has thrust the populous town of Chitungwiza in the limelight but he never returned from hospital alive Magaya’s death brings to six the number of people who died after the powerful blast which affected 12 houses, some reduced to debris.

Traditional healer Speakmore Mandere, an infant and three others were blown to pieces by the horrible blast, but Magaya survived the explosion, at least for a week. Others who survived are still reeling.

Anotida Magaya, who is 15 months old, like his late grandfather Tembo, was rushed to hospital after the blast. He was discharged on the very day but his mother says she wails daily and can hardly walk, something she could do with relative ease before the blast.

“He was also in the house at the time of the blast but survived with a swollen leg. We took him to hospital and he was discharged on the same day. However, he seems to be haunted as he cries now and again,” said Tineyi.

The Magayas are now a traumatised lot, with the death of Tembo piling the misery on a family accustomed to peace. Now living on the goodwill of well-wishers, the Magaya family is resigned to fate and is getting used to the inquisitive stares of passersby.

The once peaceful Ndororo street in Chitungwiza’s Zengeza 2 suburb is now a hub of activity as curious Zimbabweans are taking turns to view the ruins of three homes razed to the ground by the mighty explosion.

Dubbed the House of Death because of the goriness of the explosion that reduced human beings to pieces, the blast scene is now to Chitungwiza a hotspot for tourists.

Although the police are yet to confirm the cause of the explosion, the Daily News has it on good ground that the blast, which broke windows within a 100 metre radius, could have been caused by a bomb.

It is not only dozens of churches that have volunteered to help in Chitungwiza, but also the local people who are displaying a tremendous sense of solidarity. Daily News