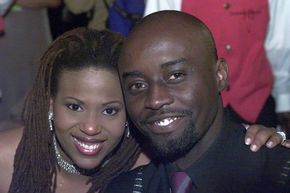 Ex Generations Star, Pamela Nomvete, has told of her tumultuous marriage to ‘skirt chasing’ Zimbabwean Collins Marimbe in her tell-all biography titled Dancing to the Beat of the Drum: In Search of My Spiritual Home.

Nomvete, who was popularly known, loved and equally hated by her fans for her bitchy role as Ntsiki Lukhele, published the book this week in London, where she is now based. In it she goes into excruciating detail about the marriage to Marimbe who was seven years younger than her.

Although she did not name him in the book, the marriage and subsequent collapse were widely reported in the South African media. In the book published in London she calls him, Farai Sapiens.

“Farai announced soon after his confession of infidelity that he was in fact a polygamist. He’d fallen in love with this girl but he was not going to give me up because he loved me too. Therefore, in the tradition of true polygamy, I had to meet her.”

Nomvete describes Farai as someone who enjoyed the limelight and wanted to make money quickly.

She writes “Farai had one problem. He could never stick to anything to see it through. If he wasn’t realising a million straight away he would decide this was not for him. He talked a good game, but he wasn’t too good at executing a game plan and sticking to it. It didn’t help that he was in the spotlight being in a relationship with the biggest bitch on television.”

She says she was Farai’s dream and nightmare.

“A dream because he could spend money on looking good and smelling good, going to fancy gatherings, driving Mercedes Benzes and being photographed. He could pretend he was a Hollywood star. His nightmare was that none of it was his doing. So the attention was never on him or what he had achieved. This drove him crazy. He wanted me out of the way but he needed me.”

Nomvete also goes into great detail about Farai’s extended family who all descended on her house to sponge off her. She described two of his brothers as professional thieves who once cleaned her house and his nagging mother who made numerous shopping trips to SA.

She says of Farai’s mother : “She would often intimate to me that a good African wife cooked what satisfied her husband, gave him what he wanted in bed and kept quiet if he frequently came home drunk and reeking of another woman’s perfume. I remember her adding snidely that I could be forgiven for not understanding being from England, but I would learn.”

Nomvete was born to South African exiled parents in the UK. Her father was a UN economist while her mother was a nurse. They are both deceased.

In the book Nomvete also discloses for the first time her love affair with the soapie’s other ex-kingpin, veteran actor Sello Maake ka-Ncube – but she stresses that their sizzling relationship was before she joined the king of soapies.

Nomvete, who is now starring in Britain’s favourite soapie, Coronation Street , lays bare her secret of aborting at age 23 and the pain of having a miscarriage more than a decade later.

Impregnated by a “committed” producer she refers to as “Forbidden Lover”, she was keen to keep the baby this time around. The details of how she got pregnant having sex in the back of a car and how she lost the baby makes this an unputdownable read.

She is also scathing about the Generations management and some of the fellow cast members, saying the producers were incompetent and heartless. She also exposes a culture of alcohol abuse that engulfed the soapie during her six-year stint.

“One morning … they told me that one of the actresses had turned up drunk and the day was made up mostly of her scenes. It was so bad the producers had told her to sleep it off, so they would see what she was like in the next couple of hours; consequently, the rest of us just had to wait and see,” she writes.

“Furious, I stomped off to the studios to see if I could catch one of the producers, but I bumped into the actress who was playing opposite the drunk one that day. This woman was swaying and reeking of alcohol. When I asked her what the hell was going on, she responded, ‘If you can’t beat them, join them’.”

Fellow cast members at that time, Sophie Ndaba-Harrington and Themba Ndaba, say they did not experience anyone drunk on set, but Ndaba says that some actors were treated better than others “because of race issues”.

“The narrative is hilarious!! I recognise some of the individuals she is referring to. My view is that Generations is a TV production and not a psychiatric ward,” the soapie’s founder Mfundi Vundla commented on Nomvete’s tell-all.

About the night on which she got pregnant, Nomvete writes: “I was very drunk and very tingly, having consumed a fair amount of champagne.

“Forbidden Lover at some point in the evening whispered in my ear that he and his girlfriend had split up and she had moved out. He suggested I follow him home … my libido rocketed through the stratosphere.”

She crashed her car behind a police van as she was speeding to his bed that night. “I woke up to this woman staring down at me and telling me to get out of her bed. I felt like a whore,” writes Nomvete.