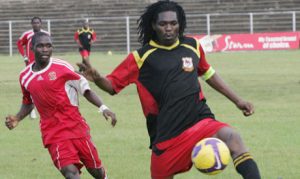 By Eddie Chikamhi in Mutare

League champions Motor Action kept alive their hopes of another silverware this season when they outplayed Zimbabwe Saints on a water-logged pitch at Sakubva yesterday and book a date with Harare rivals Dynamos in the Mbada Diamonds Cup final.

The Mighty Bulls, who could have easily overrun their opponents in the first half had it not been of goalkeeper Munyaradzi Diya’s brilliance, got their opener from Tawanda Ushe in the 12th minute before Passmore Bernard sealed the game with a fine effort midway through the second half.

The match, which was handled by Zambian referees, was delayed by exactly an hour as groundsmen had to scoop out water to clear the turf after rains that pounded the city earlier in the day left large puddles that made it impossible for play to start.

Saints found it difficult to adjust to the wet conditions but came back from the breather more lively but they fluffed chances including a late penalty that was crashed against the crossbar by skipper Abraham Mbaiwa. But the Mighty Bulls meant business from the onset and their performance left assistant coach David George a satisfied man. Motor Action will now play Dynamos in a dream final on November 27.

“We did well today, unlike in other games that we have played of late. Despite the wet conditions we still managed to get our game together and I am happy with the performance,” said George. Kuda Musharu could have put the Mighty Bulls ahead in the first minute when he found himself at the end of a long ball from the centre but was too casual with only goalkeeper Diya to beat.

But after a sustained period of pressure Motor Action were rewarded with a free-kick in the 12th minute when midfielder Thembani Masuku was fouled just outside the box.
Up stepped Ushe with a curling effort that went past the diving goalkeeper. Diya who was voted man of the match for a string of good saves, was forced to produce his best in the 27th minute to clear Ocean Mushure’s shot after his defenders had made a half-hearted clearance from a corner-kick.

The Mighty Bulls had a great opportunity in the 32nd minute after Masuku was set up by Masimba Mambare but the former Shooting Stars midfielder tumbled to the ground with the goalkeeper to beat and appeals for penalty were turned down. Saints returned from the breather more purposeful and had Motor Action on the backfoot for a period before Benard made a spirited run to double the Bulls’ lead and kill Chikwata’s hopes of coming back into the game.

Motor Action rightback Bernard saved his team in the 64th minute when he cleared from the line a goal-bound effort from Dumisani Sibanda who had jumped high to connect with his head from a corner kick. Saints who attracted many sympathisers in their corner with a great fighting spirit in the second period got a lifeline in the 85th minute when Zambian referee Wilson Mphamisi awarded a penalty for handball.

But it appeared luck was not on their side as the usually reliable Mbaiwa disappointingly hit the woodwork with Marlon Jani beaten. Saints coach Ephraim Chawanda said the Bulawayo side who are embroiled in the fight against relegation, bowed out with honour after surviving to reach the semis.

“We have gone as far as we could and I am proud of my boys. We did well under the circumstances but I think it took us too long to adjust to the conditions on the pitch today,” said Chawanda.