HARARE – As the mystery surrounding the death of Retired army General Solomon Mujuru deepens, family members are considering hiring foreign investigators because some of them suspect foul play. 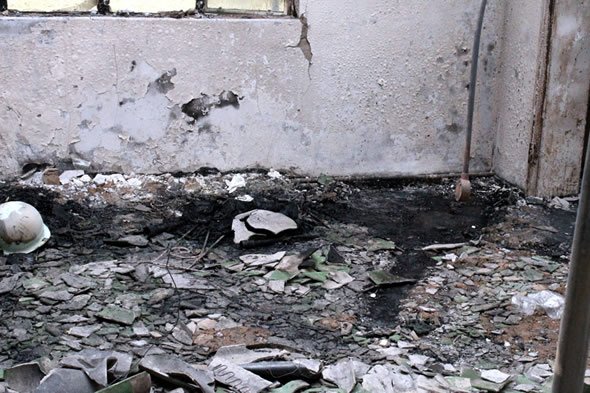 The following picture from London based SW Radio Africa shows the burnt out farmhouse and the exact spot (darkened area) where Mujuru’s charred body was retrieved from.

This comes as fresh intricate details filtering through show that there were a number of anomalies leading to Mujuru’s death which the family want answered. Police have also launched massive investigations into the cause of the fire and how Mujuru, a well-trained soldier failed to escape the blaze despite his bedroom having windows without burglar bars.

Mujuru, husband to Vice President Joice, died in a mysterious inferno at his farm in Beatrice on Tuesday morning with warring Zanu PF officials and supporters saying they are not satisfied that the fire was a genuine accident. The Daily News, which visited the Mujuru home in Chisipite and the farm yesterday, can exclusively reveal that family members are questioning loopholes which make them conclude there was foul play.

Solomon Mujuru could have been murdered – former…

The Daily News was told yesterday that Mujuru left a drinking place 20 minutes’ drive from the farm and mysteriously found out there was no electricity at the farm. The house is said to be connected directly to Zesa cables which are not switched off as he is a VIP and husband to the Vice President. They also claimed, the electricity at the farm is never switched off but on that particular day, there was no power.

“Everything that happened on the day looks strange, maybe we are being too emotional but we have to question certain facts. The general arrived at the farm where there are two policemen and private security guards stationed there.”

“We wonder, why the guards did not go and fetch the keys for the general, why they did not help in removing groceries from the car and why they could not assist him when the house was on fire. All these questions need to be answered,” said an angry family member at the family’s Chisipite house.

The Daily News was told yesterday that Mujuru only managed to remove from his car a pistol, which he always moved around with. But what further baffles the family is that where his body was reportedly found was the furthest from the nearest exit point from the bedroom. Some of the family members are wondering why he did not use the nearest exit door in attempting to escape the fire.

This is why some Zanu PF youths and relatives were visibly angry yesterday and openly demanded explanations around Mujuru’s death saying it could not have been an accident. The youths were churning out the song Ndimi makauraya gamba redu (You killed our hero) forcing Vice President Joice Mujuru to strenuously appeal for calm.

With the anger simmering among the agitated youths and relatives, the Vice President said investigations would prove the truth. She seemed to be mature and composed in her appeal.

“As the acting President and the wife of the late Solomon, I am asking for one thing from you; don’t listen too much to things that are being said at the moment, it will make you comment and end up saying things (which) you will not be able to stand for tomorrow.”

“We don’t have to go an extra mile in soliciting for information. What we have to do, follow what we agreed with Solomon (while he was alive) that we will not comment on anything whether good or bad, true or false,” she said. “It is finished, I don’t know whether this is how the Lord wanted it to happen. Solomon is finished,” she added.

But family members insisted it was a way of calming down tempers, which are threatening to explode due to the serious factional fighting in Zanu PF over who will succeed Mugabe. The family members said only a probe involving experts who are neutral will bring out the truth.

There are other different factions in Zanu PF all battling to replace Mugabe, who however seems not interested in giving up power yet. Zimbabweans from across the political divide who thronged the official Mujuru residence to pay their condolences to the family of the late liberation leader expressed disbelief that Mujuru could be killed in a fire.

All those who spoke to the Daily News demanded an independent probe. Politicians, businessmen, war veterans, service chiefs and ordinary members of the public were at the Mujuru home to mourn with the family. They described Mujuru as a humble, peace loving man.

Edwin Tsvangirai, the first born son of Prime Minister Morgan Tsvangirai and his sister Vimbai were among the huge crowd that gathered at the family house. Mujuru’s death comes at a time when the succession battle to replace the 87-year-old leader has intensified owing to Mugabe’s advanced age, reported ill health and his unpopularity among Zimbabweans.

What creates more questions than answers is that the liberation war leader is known to have survived vicious attacks during the war but failed to escape the “candle” fire which roasted him to ashes.  He also escaped an inferno in the 70s.

The late hero will be buried on Saturday at the National Heroes Acre where he will join other genuine freedom fighters such as Joshua Nkomo, Joseph Msika, Josiah Tongogara and Edgar Tekere among others. Daily News

The farmer Mujuru evicted speaks out

Mujuru had become an irritant to Mugabe

Solomon Mujuru could have been murdered – former minister Tshinga Dube