Mujuru had become an irritant to Mugabe

General Solomon Mujuru died fighting President Robert Mugabe’s plan for life presidency and early elections, Zanu PF insiders have told the Daily News. According to senior Zanu PF sources, Mujuru was the only member of the party’s politburo who repeatedly resisted Mugabe’s election plans “right down to the grave”.

Mugabe and his hardliners have been pushing for elections to be held this year or early next year despite lack of progress on democratic reforms. Sources said Mugabe was pushing for early elections to ensure the polls were held when he was still “strong enough” to remain the Zanu PF candidate.

The sources said Mujuru was opposed to both early elections and Mugabe’s plans at life presidency. “There was a lot of silent political fighting between Mugabe and Mujuru,” said a source familiar with the two men.

The source said Mujuru remained the only person in the politburo who could confront Mugabe on sensitive issues after most of the 87-year-old’s war time peers died or were sidelined since independence from Britain in 1980. 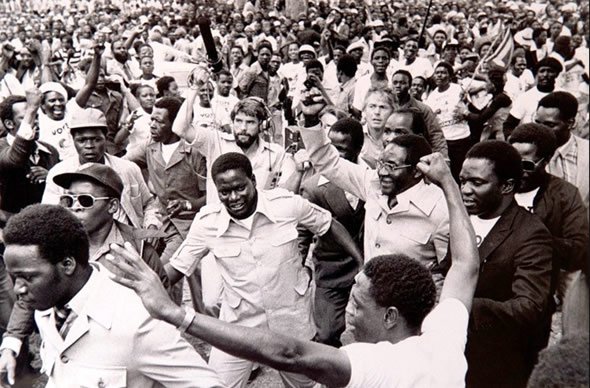 Zanu-PF leader, Robert Mugabe arrives in Highfields to address a pre-election rally in 1979. Next to him are much younger, now-retired Army General Solomon Mujuru (centre) and current Minister of Defence Emmerson Mnangagwa (right)

“He was the only one who could question some of the decisions by Mugabe. He would do it politely but firmly and somewhat he had become an irritant to the president. “The main issues the two disagreed on were, the timetable for elections and whether Mugabe was going to be our candidate,” said another source.

Mujuru was also seen by some party members as being too close to Prime Minister Morgan Tsvangirai. Mugabe and Tsvangirai — long time political rivals — are now coalition government partners following disputed elections in 2008.

He said Mujuru felt that the coalition government should be given more time because the economy was still performing badly while Zanu PF was not in a position to fight and win an election.

“The general had a strong view that the president should step down and allow the party to choose a new leader for purposes of renewal,” said the source. “Mujuru was seen as the power behind his wife Joice’s ascendancy to the party and country’s vice presidency.”

Joice and Defence Minister Emmerson Mnangagwa are largely viewed as the major contenders to Mugabe’s throne. According to sources, these were some of the issues that kept Mujuru and Mugabe at loggerheads, although the intensity of the fight was not made public by the party.

“The fights became more pronounced from 2008,” said another insider. Mujuru had the feeling that Mugabe had done his part in the politics of the country and did not anticipate that he would seek a fresh mandate.

“It is an open secret in the party that Mujuru was one of the powerful politicians who supported Dr Simba Makoni in trying to challenge Mugabe for the presidency in 2008. Although he did not admit the fact that he was behind Makoni’s political project until he died, he did not completely disown him,” said the source.

The sources said although differences between the two former guerrilla war allies widened in 2008, the tension had been building for over a decade.

“I remember very well in 2000 when he openly challenged President Mugabe in a politburo meeting when he questioned the role Jonathan Moyo was playing in the party. This was after Moyo had been invited by Mugabe to attend politburo meetings when he was not a member.”

“Mugabe defended him saying he was the party’s political consultant. It was at a time when Moyo was looking for a political home and wanted to be accepted by the Zanu PF leadership,” the source said.

Mujuru had an edge over other politburo members because he had solid credentials dating from his days as a commander of the liberation war as well as his key role in pushing Mugabe to the helm of Zanu PF during the war, the sources said. Daily News

Zim braces for a season of mass protests; Chamisa to lead from front