Stuttgart have revealed that Silas Wamangituka, who was their top scorer in 2020-21, has been playing under a false identity. 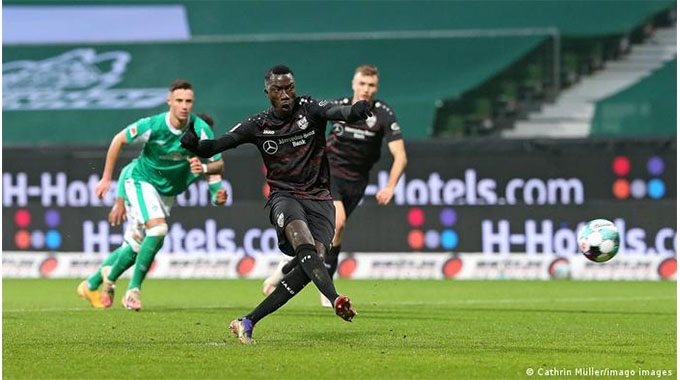 The forward began his career in the DR Congo before moving to French minnows Ales in 2017 and was snapped up by Ligue 1 club Paris FC a year later.

Stuttgart then managed to lure Silas to Germany in 2019, tying him down to a five-year deal, but the club has now disclosed details that prove his transfer documents were falsified.

Stuttgart have released a statement confirming the player’s real name is Silas Katompa Mvumpa and that he was born in 1998 not 1992, which makes him 22-years-old.

The club has pledged to support Silas following his admission that a former agent from Belgium changed his personal data after gaining control of his bank account and possession of his passport.

The Congolese forward has opened up on the situation via Stuttgart’s website, insisting he was unable to come forward with the truth previously due to fears his family’s safety could be compromised.

“I have lived in constant fear in recent years and I was also very worried about my family in the Congo. It was a difficult step for me to reveal my story,” he said.

“I only dared to do this with the support of my new consultants. I realised that I no longer have to be afraid and that we can put everything on the table together. I wouldn’t have dared to take this step if Stuttgart, my team and VfB hadn’t become a second home for me where I feel safe. Today I am very relieved, and I hope that I can also encourage other players who have had similar experiences with agents. I am deeply grateful to VfB Stuttgart for all the trust and support they have shown during this time.”

Stuttgart sporting director Sven Mislintat, formerly of Arsenal, has vowed that Silas will continue to be a part of the squad going forward while praising him for having the courage to speak out in such testing circumstances.

“Silas remains the player and the person who has played his way into the hearts of our fans and his teammates since he was here in Stuttgart,” he said.

“In terms of the name change, he is above all a victim. We will protect him accordingly. I have great respect for the fact that at his young age he was almost on his own and without knowing the consequences he dared to take the step to clarify his situation.

“We will continue to help him in every way possible. Silas is part of the VfB family. He should also play football for VfB Stuttgart in the coming season as soon as he has recovered from his cruciate ligament tear.”

Stuttgart have said they won’t be revealing the name of Silas’s one-time representative for legal reasons, but the club’s head of sport Thomas Hitzlsperger says an investigation is now underway.

“We took all measures immediately and alerted all necessary authorities after Silas told us,” he said.

“We make this case public to underline that we are proceeding in a transparent way.”

Silas has played 58 games across all competitions for Stuttgart over the past two seasons, scoring 21 goals.

Eleven of those efforts came in the Bundesliga last season as he helped the club finish ninth in the standings, and he also has 13 assists to his name. – Goal.com