Images showing the late Adam Ndlovu in action, during his trial period at Manchester United, have finally emerged. 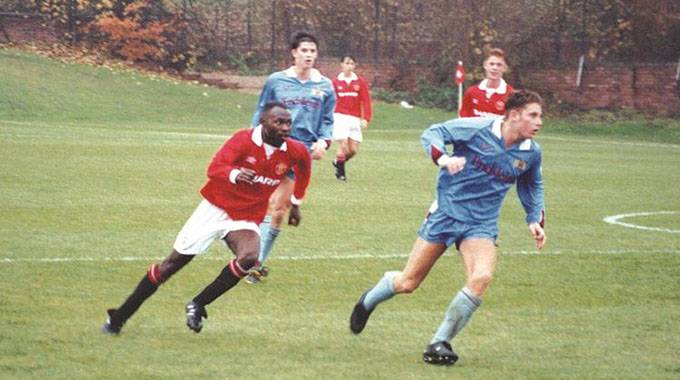 Some critics have questioned whether the Zimbabwe football legend, who died after the car he was travelling in veered off the road and crashed into a tree in December 2012, actually had trials at the Red Devils.

The Herald have all along argued that Ndlovu had an attachment at England’s biggest football club at a time Sir Alex Ferguson was looking for a forward to provide the X-Factor for the team.

The legendary Scotsman ended up settling for Frenchman, Eric Cantona, who became a huge influence at Old Trafford, leading the Red Devils to glory on a number of fronts.

Cantona was lured from Leeds United.

“Adam was only 20 when he attracted the interests of Coventry City and went there on a six-week attachment, with Claudius Zviripayi, where he impressed the then Sky Blues’ manager, Peter Sillett, who had already made a decision to sign Peter Ndlovu,’’ this newspaper reported after Adamski died.

“Adam came back home, not because he wasn’t good enough to sign for Coventry City then, but simply because the board of directors at the Sky Blues had made a decision that they could only let their coach sign one of the two brothers. 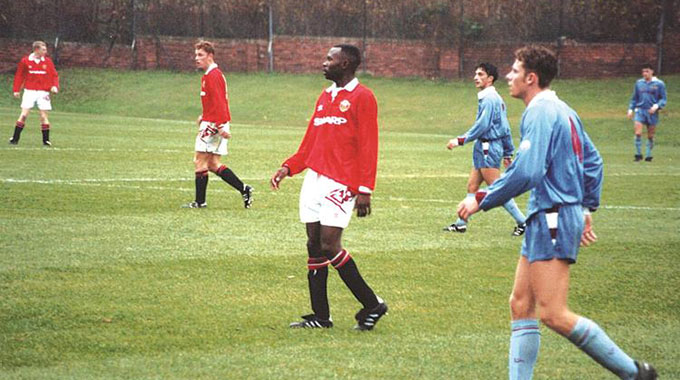 “It wasn’t an easy era, back then, for black players, coming straight from Africa, to make an impression on a coach of an English Premiership club.

“The good African players who had ventured into Europe then had gone to France, Belgium, Germany and the Netherlands, while England, isolated from mainland Europe by the channel, was virgin territory for the boys from the mother continent.

“There was an element of doubt, when it came to African players, which lived in the minds of English Premiership coaches then, about their pedigree, their discipline, would they adjust to playing football in those brutal winter conditions, would they be accepted by their teammates at a time when a good chunk of professional footballers in England were a group of drunkards who behaved as if they ruled the world?

“Crucially, would they be accepted by the fans, many of whom were blatantly racist.’’

“I wanted to sign both of them (Adam and Peter), but the board would only let me sign one, and I went for Peter,” Sillett told BBC Sport.

“Adam went off to Switzerland and had a good career but Peter was the most talented player I have ever seen. They were both cracking lads, and were very, very close as brothers.”

While, the story that Adamski almost signed for Coventry City has never been doubted, that he was good enough to be invited for trials at Old Trafford has been questioned by many.

“Chances are that he would have signed for the Red Devils but for the arrival, on the market, of a certain genius called Eric Cantona who would get the place and, in the process, shift the balance of power in English football from Anfield to Old Trafford,’’ this newspaper reported. 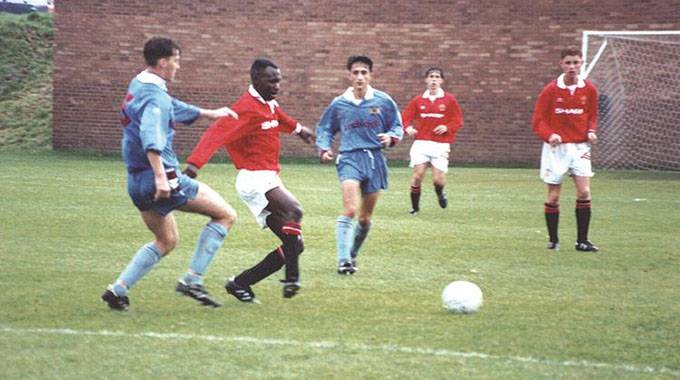 “The European clubs simply couldn’t resist him and invitations for trials came from all over the places and he went to Sweden, Denmark, back to England, Greece, Germany and even to Turkey where he had trials at Galatasaray long before Norman Mapeza came in and became the first Zimbabwean to play in the Turkish top-flight league.

“Adamski eventually settled in Switzerland and in ’97, three years after his arrival, he was voted Player of the Year after his 14 goals for Delemont won him the Golden Boot, took his team to the semi-finals of the Swiss Cup and brought him to the attention of FC Zurich who took him on board.’’

Now, for the first time ever, images have emerged showing that, indeed, Adamski had a month-long trial period at Old Trafford at the turn of the ‘90s.

This will, in a way, end the debate, especially among those who have been questioning whether this was, indeed, true.

The images show the Zimbabwe international playing in a match which also features Nicky Butt, one of the members of the Class of ’92, which had the likes of David Beckham, Ryan Giggs, Paul Scholes and the Neville brothers — Gary and Phil.

He also won the UEFA Champions League in 1999.

Butt is now head of the first team development at United and reports directly to manager Ole Gunnar Solskjaer. The Herald