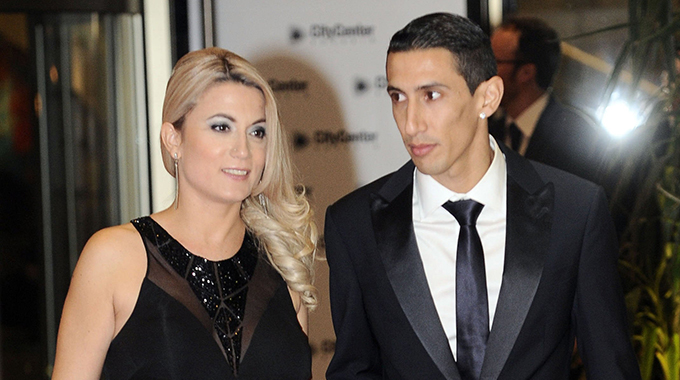 The Argentina international’s partner was far from impressed with what Manchester had to offer as she reflected on the PSG star’s time in the UK.

Jorgelina Cardoso has revealed that she “didn’t like anything” about Manchester after her husband swapped Real Madrid’s Santiago Bernabeu for Old Trafford in 2014, describing the experience as “horrible” and referring to England as a “sh*thole”.

The Argentine spent just one season with the Red Devils, despite joining for a then record fee for a British club, with his time at United largely remembered for a lack of consistency in performances given the money involved to prise him away from Madrid.

Things were not much better off the pitch either, according to Cardoso, as the couple had argued over the merits of a move to the Premier League long before Di Maria’s ill-fated spell in England’s top-flight.

“I remember Angel coming up and saying, ‘An offer from Manchester United has come in. Maybe we’ll be a little more financially secure…’.

‘’We fought about it,” she told Los Angeles de la Manana.

“There was a lot of money involved, and afterwards, the Spanish were calling us peseteros (people only interested in money). And they were right!

‘’If you are working for a company and the competition comes along and offers to pay you double, you take it!

“I didn’t want to go to Manchester because at that moment in time, I was friends with Gianinna Maradona, who was married to (Sergio) Aguero, and we flew from Madrid to his house in Manchester to pay him a visit for two or three days when Angel had a few days off at Real Madrid.

“It was horrible! All of it was horrible, we went to the house and we were like… ‘See you later guys, we’re out of here’. When we left, I said to him, ‘Go to any country – except England’. Anyway, one year later and there we were in England and it was horrible, a sh*thole.”

Cardoso continued to stress that there was not a single thing she enjoyed about the experience.

“I didn’t like anything about it, not a thing. The women are all skinny, prim and proper . . . weird. You’re walking down the street and you don’t know if they’re going to kill you or what. The food’s disgusting.

‘’All the girls are all dolled up to the nines, perfectly made-up and there’s me with my hair in a bun and with no make-up on.”

Meanwhile, Bruno Fernandes’ transfer to Manchester United is being investigated by FIFA after his former club Sampdoria lodged a complaint claiming they are owed money from a sell-on clause.

Fernandes moved to Old Trafford in January for a fee of around £47 million (US$58m) but Sampdoria, who sold the midfielder to Sporting three years ago, are arguing they should have been paid around £4m of the transfer fee due to a 10 per cent sell-on clause.

The 25-year-old spent one season at Sampdoria before signing for Sporting in 2017 for £7.5m and they believe they are owed 10 percent of any profit made by the Portuguese club relating to Fernandes.

A FIFA spokesperson said: “We can confirm that on April 3, 2020 the Italian club, Sampdoria, lodged a claim with FIFA against the Portuguese club, Sporting Clube de Portugal, related to financial obligations set out in the contract corresponding to the transfer of the Portuguese player, Bruno Fernandes.

“The matter is currently being investigated and consequently we cannot provide further comments.”

There is no indication that Manchester United are liable for any of the money.

Fernandes has had an instant impact in Ole Gunnar Solskjaer’s side and has been credited for turning United’s season around after improved performances following his arrival. — Goal.com