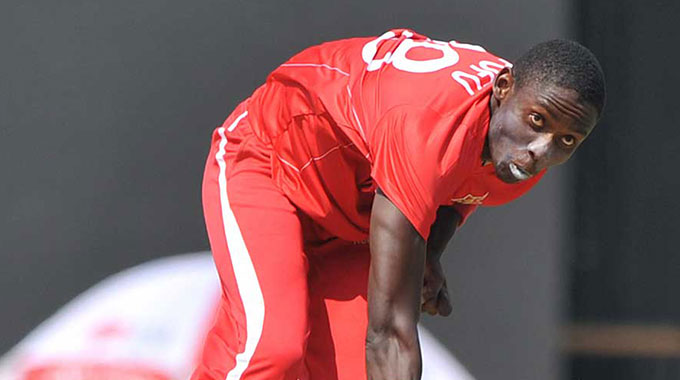 Veteran pace bowler Christopher Mpofu sent a message to the national selectors with a five-wicket haul for Tuskers against Rhinos on day one of the Logan Cup first class cricket encounter at Queens Sports Club yesterday.

An incredible 21 wickets fell on the opening day and at stumps Tuskers had a bit of an edge over their opponents.

Mpofu picked up five wickets for 16 runs in 13 overs. He bowled six maidens as Tuskers restricted Rhinos to 98 from 40.3 overs in response to their first innings score of 106 off 34.4 overs.

Both teams had a horrible time with the bat, Luke Jongwe top scoring for Tuskers with 33 runs.

Muzarabani back on the local front

Pace bowler Neville Madziva picked up three wickets, while there were two wickets each for fellow seamer Tafara Chingwara as well as the spin duo of Tendai Chisoro and Brandon Mavuta.

Rhinos’ top scorer was Nyasha Mayavo with 39 runs. Peter Moor’s quest to attract the attention of national selectors was unsuccessful as he fell for a two-ball duck after being trapped LBW by Sheanopa Musekwa.

Tuskers were 39/1 from seven overs in their second innings, a lead of 46 runs. Nkosana Mpofu was bowled by Madziva for his fourth wicket in the match.

The match could end today if yesterday’s trend continues. The Chronicle

Muzarabani back on the local front