Dominican Convent High School pupils were yesterday barred from entering the school premises or classes for failure to pay fees amid uproar from parents. 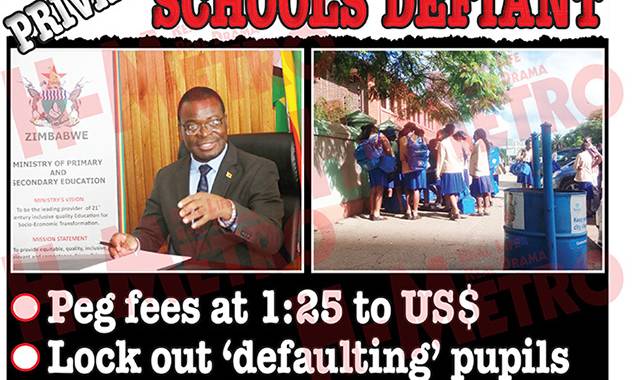 This is a continuation of a standoff between the school and parents, which escalated last year.

Parents have been banking on government intervention but the parent ministry insists that private schools’ fee structures are a matter for the institution and parents to fix.

The Catholic run private school’s pupils were told to call their parents while waiting outside the school premises or ensure that the ZWL$16 500 fees were fully paid before admittance in class.

On Monday, a message was sent out to parents by the school advising them that ONLY those fully paid-up pupils would be allowed into classes yesterday.

A significant number are expected to pay around ZWL$27 000.

The figure includes the $16 500 for the First Term while the remainder is outstanding from the 2019 Third Term when the school asked for top up but without agreeing on the fee with the parents.

“Please be advised that ONLY those who have paid all school fees will be admitted into the school premises this term. Dominican Convent high school,” reads the message.

H-Metro was at the school where some students stood at the gate as parents expressed embarrassment over the handling of the situation.

The humiliated pupils were later told to wait in the hall.

One parent, who spoke on condition of anonymity, claimed that parents had agreed on a WhatsApp group to collectively turn down the fees structure but some parents went behind their back and paid in full.

However, it also emerged that some of the parents get school fees allowances from their employers and thus cannot participate in the collective action.

“It’s embarrassing, our kids are just standing at the gate, at least they should allow our kids to get in class and deal with us the parents.

“We used to pay in installments but now they’re just being hard and this is the only school inonetsa first day,” she said.

Another affected parent acknowledged that the collective action by disgruntled parents would struggle or fail completely as there are those withdrawing kids from far more expensive schools and find the $16500 affordable in one installment.

“The fees was increased last term when we paid around ZWL$10 000 and parents paid the ZWL$10 000 as agreed on the WhatsaApp platform.

“We did not pay the top up fee as it was never agreed on by the parents.

“You see, there are such parents who were supposed to pay ZWL$106 000 at Riverton school for a Form Four term and obviously they will not worry about ZWL$16 500. These will easily take up slots being created by defaulting parents. So this battle can easily be lost because of sponsored parents and those coming from way too expensive schools like Riverton.

“It is unfair to some of us and the school should consider such situations,” he said.

A Dominican Convent senior staff who spoke to H-metro on condition of anonymity said the affected parents should follow the guidelines of the school.

“Please, don’t quote me; the parents who are complaining really know what is required at this school.

“They know how this school is run and so they should not make any fuss about children being told to call their parents to pay up the balances,” she said.

One parent identified as Stewart said government should intervene since private schools are getting away with exorbitant school fees.

“Government is not clear on private schools and they should act.

“We thought the school would understand in this kind of economy but they’re coming hard on parents.

“The school is not lenient enough because making kids sit out classes nekuti havana kubhadara fees is not a solution, they rather face us as the parents,” he said.

Some parents at the school premises suggested a court process claiming that the school is not appropriately consulting them as stakeholders.

The school head was not immediately available to comment. H-Metro