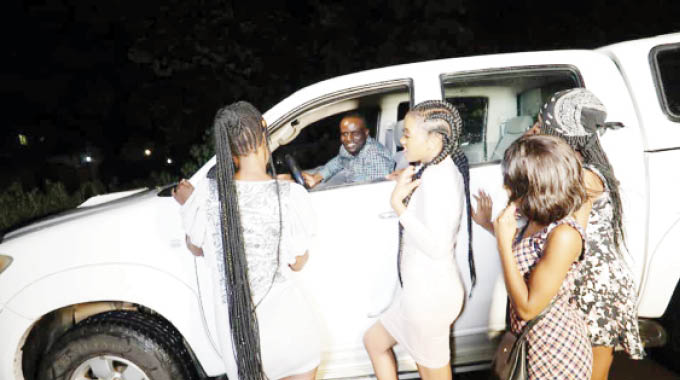 It may seem bizarre for a prophet to interact with prostitutes, but for musician, Prophet Freddy who has shot a video with the ladies of the night, it is just business as usual as it is part of his artistic creativity.

Prophet Freddy, Goodness and Mercy Ministries founder found himself trending this past weekend after he teased followers with pictures of him seemingly seeking services of prostitutes while in his car.

The images from the forthcoming Ndekeda video which features Tocky Vibes triggered a social media frenzy with some denouncing the clergyman’s actions.

Speaking from his base in Harare, Prophet Freddy said he chose the popular Harare’s Avenues area, where prostitutes ply their trade in the capital, for one of the video’s scenes because it suited the song’s lyrics.

“My fashion is about people and fun” – Tocky Vibes

“First of all, the song Ndekeda is about people who want to be rich by any means possible and these include prostitution and corruption,” he said.

Further explaining his inclusion of prostitutes, Prophet Freddy said people need to understand that besides being a man of cloth, he is also an artiste.

“People should understand that I’m an artiste and to stay in the league requires one to be creative. That’s why I chose the Avenues Street because that’s where prostitution is rife in the city centre,” he said. Asked how his congregants and critics that have been attacking him on social media, would feel about the video that will be released today, Prophet Freddy said:

“I’ve nothing to say at all. What I can say is that I’m an artiste and people should not be quick to judge, honestly.”

The prophet who is on an aggressive music video campaign said he chose to work with Tocky Vibes because of his clean lyrics. The Chronicle

Chinyoka on Tuesday: Nothing more painful than to lose a child

“My fashion is about people and fun” – Tocky Vibes