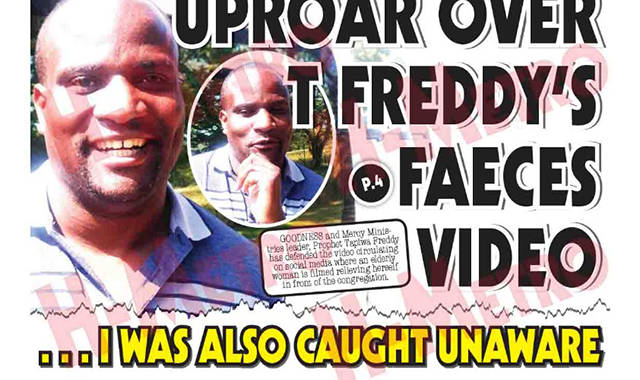 Goodness and Mercy Ministries leader, Prophet Tapiwa Freddy has defended the video circulating on social media where an elderly woman is filmed relieving herself before the congregation.

Prophet Freddy said he was also shocked to witness the instant deliverance when he was praying for the elderly woman.

“The woman has not been going to the toilet for some days before she was brought to me for prayers,” said Prophet Freddy.

“On praying for her, she instantly received her healing and I was also shocked by the instant deliverance.

“We have been witnessing several people vomiting, crying and manifesting in various ways during their deliverance and defecating was part of the deliverance since it had to do with stomach disorders.

“As to why the video was posted on social media, we have been posting everything we do during our services and this was also on camera.

“I conduct live church services that include making prophecies to people including those outside the country.

“If you watch other live services used to be carried by the late Prophet TB Joshua you agree with me that some of the people would be screened half naked with their private parts exposed,” said Prophet Freddy.

Asked if the deliverance was not stage managed, the Ndirikurwadziwa singer denied stage managing services saying the Bible has many of such miracles that can be questioned as well.

“I do not stage manage miracles; only that spiritual people understand spiritual matters,” said Prophet Freddy.

“Jesus Christ performed several miracles recorded in the Bible that look unbelievable to pagans and people of canal minds.

“Walking on water, healing of the blind with mud, changing water into wine, all these can be debated but to those who believe they praise their saviour.

“Biblical Moses performed a miracle that stopped water from flowing and led Israelites to cross on a dry sea.

“All these miracles cannot be understood by people of canal minds but to us who believe it is the power of God.

“The woman left the service happy and promised to bring her testimony so I cannot thank God for doing such things among his people,” said Prophet Freddy.

He confirmed his displeasure about his song ‘Ndirikurwadziwa’ being linked and attached to a video of Manchester United on their recent match defeats.

“That song is based on a true story on how I was affected by the destruction of my church structures in Glen View,” said Prophet Freddy.

“But when I hear the song following defeat of Manchester United it affects me much since I am one of the supporters of that team.

” I want to believe that the person who created the video adding that song knew that I am a Manchester United supporter, ” he said. H-Metro