A Harare-bound bus was yesterday reduced to a shell after it caught fire near Tree Tops Tollgate, about 20km from Gweru along the Bulawayo Road. 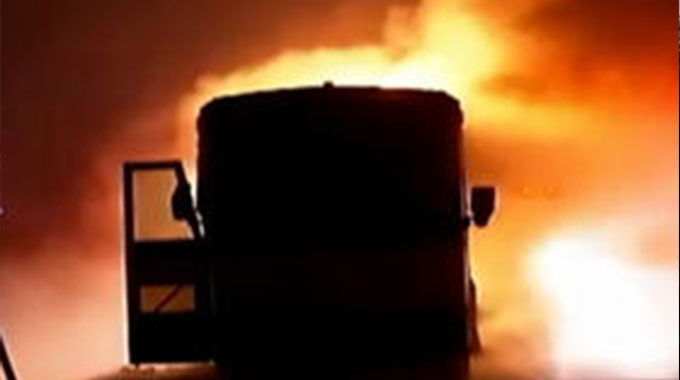 No one was injured as the more than 40 passengers disembarked safely. They, however, lost property worth thousands of dollars that was on the bus. The losses could have been bigger were it not for soldiers who helped offload goods that were in the trailer.

The City Bus that was coming from Gaborone in Botswana caught fire at around 12:30PM after the driver made an emergency stop following a mechanical fault. The fire is said to have emanated from the right rear wheels and quickly spread, reducing the bus to a shell.

A passenger, Ms Gloria Mwale, a cross border trader from Kwekwe told Chronicle at the accident scene that the fire was threatening to spread to the trailer where she said 90 percent of the goods belonging to the passengers were loaded.

She said passengers were growing despondent as the trailer had electrical goods, blankets, smartphones, chargers, clothes and many other things imported by mostly cross border traders for resale.

“Fortunately an army truck came from nowhere and the brave soldiers disembarked and like I was now watching an action movie they rescued our goods which were in the trailer,” she said.

After the heroic act, Ms Mwale said, the soldiers left.

Another passenger, Mr Admire Chebundo from Harare said they left Gaborone at around 8PM on Saturday and the bus started developing mechanical problems when it was leaving Bulawayo.

“At one time the driver and other crew went out and we heard that they had tied something like a damaged brake cord to something. Then we heard that the bus was binding and we are lucky that the fire started when we had all disembarked from the bus. We are also grateful to the soldiers for rescuing our luggage that was about to be consumed by the fire,” he said.

“I can confirm that the bus caught fire in Gweru and the majority of the goods were saved. That is all I can say for now. Investigations as to the cause of the fire are ongoing.”

“Around 12:45PM we received a phone call to the effect that a City Bus was on fire near Tree Top toll gate. When we got there the bus was completely gutted by fire except for the trailer. We managed to put out the fire.

Gift Amuli back in studio after 2 years