By Charity Besa and Freeman Razemba

Flamboyant businessman, Frank Buyanga Sadiqi is leaving no stone unturned in a protracted custody battle with baby mama, Chantelle Muteswa and has now approached the Law Society of Zimbabwe.

Buyanga on Thursday wrote to the Law Society complaining against the conduct of lawyer, Munyaradzi Bwanya of Wilmot and Bennet Legal Practitioners.

At the weekend Buyanga escaped a warrant of arrest that had been issued against him in the event that he failed to return a four-year old child he had taken over the Easter holiday.

Buyanga denies claims by police chief that he is a fugitive,…

While Chantelle claimed Buyanga had disappeared with the child, Buyanga on the other hand said she was the one who was evading them.

Buyanga had earlier been granted an order where Chantelle was supposed to hand over the child’s passport to Buyanga, who wanted to take the minor to South Africa, but she handed it to Bwanya for him to surrender it to the businessman.

This however, did not go according to plan and Buyanga then sued Chantelle for contempt of court and she was briefly detained last Thursday.

In the ensuing drama, Chantelle then counter-sued, accusing Buyanga of failing to return the child in contempt of court.

In an email communication between Buyanga and Chantelle, the businessman accused the ex-girlfriend of neglecting the child by being absent for seven days.

“Kindly advise when and if …can be dropped off by you at 13…Road. It is my wish that we arrange to drop him off by you at your earliest convenience. You have now been absent for seven days and I do not think it is in his best interests to spend such a long time away from his mother.

“Kindly note (and find attached a court order) that allows me to keep him if you are to keep silent in our communication,” wrote Buyanga.

Provincial magistrate, L Ncube had made this ruling on an ex-parte application on April 24:

“The applicant has been made an ex parte application for temporary custody of the minor child. The basis of the application is that after exercising his rights of access to the minor, he attempted to take back the child to the Respondent (Chantelle), however, the respondent was not there to collect him.

“It is the belief that the respondent (Chantelle) could be hiding since they reported her to the police for contempt of court after she refused to release the passport of the minor as ordered by the court.

“It is this court’s view that the application for temporary custody has been prematurely made considering that the applicant (Buyanga) still has the child in his custody after he failed to hand him to the respondent (Chantelle) who was not available.

“The applicant (Buyanga) can always hand over the minor to the respondent (Chantelle) as and when she is available. Application cannot be granted ex parte, but the matter should proceed by way of notice.”

Meanwhile, in his 23-point complaint to the Law Society, Buyanga said Bwanya actively participated in the subversion of justice by hiding the child’s passport “yet the matter had already been pronounced on by our courts.” H-Metro 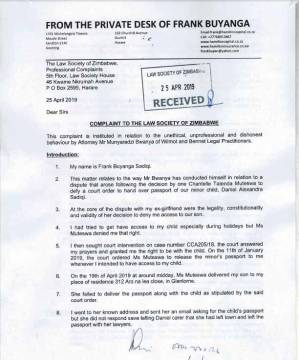 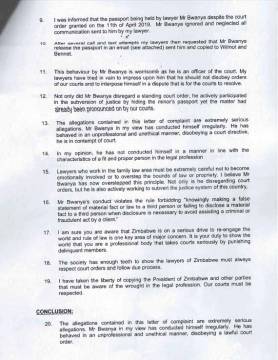 Hopewell Chin’ono: An inclusive stronger and competent leadership is the only gateway to victory for the MDC

Buyanga denies claims by police chief that he is a fugitive, blames lockdown

Tino has the last laugh in friends’ battle