Is this a CHAN kiss of life?

Zimbabwe’s hopes for a replay of their controversial 2018 CHAN qualifier against Namibia have received a massive boost following the suspension of the blundering Swazi referees Thulani Sibandze and Petros Mbingo by the Confederation of African Football. 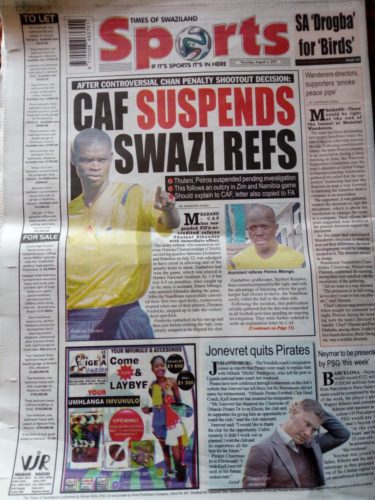 The Swazi duo has been suspended for allowing an illegitimate goal, scored in a penalty shoot-out at the National Sports Stadium last month, to somehow stand and controversially knock the Warriors out of the CHAN tournament.

The suspension of the duo is a vindication of The Herald’s position that the Warriors were robbed during that lottery by match officials who violated the laws and regulations governing football.

This newspaper has led the way to prove that the contentious third penalty converted by Namibia’s Dynamos Fredricks, where he stopped and feinted after having completed his run and then coolly slotted past goalkeeper Herbert Rusawo, was outlawed by the rules and regulations governing world football ahead of the 2010 FIFA World Cup.

We even sent footage of that penalty to the International Football Associations Board, the sole authorities when it comes to the crafting of laws and regulations governing world football, who provided an analysis that supported our position that referee Sibandze and his assistant Mbingo should have disallowed that effort and noted it down as a missed penalty.

“As you know from our previous correspondence, The IFAB does not comment on the correctness or otherwise of referee decisions as that is not our role or responsibility,” IFAB technical director David Elleray exclusively told The Herald.

“However, we are always happy to provide guidance as to the interpretation and application of the Laws of the Game.

“In this respect in the Laws of the Game 2017 /18, Law 14 states that it is an offence if the kicker ‘feints to kick the ball once the kicker has completed the run-up (feinting during the run up is permitted) . . .This Law is applicable in Kicks From the Penalty Mark (KFPM) (Law 10).

“The guidance is that once the kicker has arrived at the ball the run-up is completed and if the kicker then feints to kick then this is an offence punishable by a caution (YC – Yellow Card) and an Indirect Free kick (for a penalty in normal time) and the kick being declared ‘missed’ in Kicks from the Penalty Mark.

“This is regardless of the outcome of the kick (until the changes for 2016 /17) if the penalty was ‘illegally’ scored then it was retaken, but the philosophy now is that the player knows he/she cannot feint at the end of the run so if he/she does so they forfeit the kick and get a YC (Yellow Card).”

Our spirited efforts, though, have been ridiculed in some sections of Zimbabwe where we have been lampooned as sickening apologists for a Warriors side that struggled to find their rhythm in that controversial match which they won 1-0, to erase a first leg deficit, only to crash out in the subsequent penalty shoot-out drama.

However, CAF’s suspension of the two Swazi match officials who were expected to apply the rules and regulations and disallow the Namibians’ effort, vindicates our position that the Warriors were given a raw deal that afternoon.

But what chances do ZIFA have in succeeding should they appeal for a replay now that the two referees have blundered badly on that occasion?

There is a chance because even though FIFA regulations say that a referee’s decision is final in the determination of a match, a window of hope in Zimbabwe’s case is opened by the world football governing body’s statutes which do not classify penalty shoot-out as being part of the game.

“Unless otherwise stated, the relevant Laws of the Game and International FA Board decisions apply when kicks from the penalty mark are being taken.

“The referee shall not stop the match (during a shoot-out as if the case during the game) if a team remains with less than 7 players during the taking of kicks from the penalty mark.

“When a team finishes the match with a greater number of players than their opponents, they shall reduce their numbers to equate with that of their opponents and inform the referee of the name and number of each player excluded.”

Has a match been replayed before? Yes, on September 6, 2006, FIFA confirmed that the result of the 2006 FIFA World Cup qualifier between Uzbekistan and Bahrain on September 3, 2005 had been declared invalid and had to be replayed.

“The decision was taken by the Bureau of the 2006 FIFA World Cup Germany Organising Committee following a formal protest from the Uzbekistan Football Federation concerning a technical error by the referee of the match,” FIFA said in their statement.

(1) At the score of 1-0 in favour of Uzbekistan, in the 39th minute of the match, the referee decided to award a penalty kick to Uzbekistan;

(2) The penalty kick was taken and led to goal in favour of Uzbekistan;

(4) Consequently, the referee awarded an indirect free kick to the Bahrain team;

(5) However, in such a situation, the Laws of the Game require the referee to order the penalty kick to be retaken;

(6) The captain of Uzbekistan team protested to the referee immediately after the mistake had taken place and before the game had restarted. This protest was confirmed after the match;

(7) This technical error was confirmed by the match commissioner and the referee inspector in their respective reports;

(8) Uzbekistan protested the decision of the referee in a written request, asking for the match to be ‘cancelled’ and be evaluated with a 3-0 forfeit result;

“The bureau, taking into consideration that the referee in the match in question had indeed committed a technical error, established that, as a consequence, the match needed to be replayed. As a result, the protest put forward by the Uzbekistan team for the match to be considered a forfeit with a 3-0 result is rejected. In accordance with Art. 12.6 of the Regulations 2006 FIFA World Cup German, this decision is final and binding.”

Swazi media reported yesterday that Sibandze and Mbingo have been suspended, citing the match commissioner’s report, and CAF have launched investigations into their controversial handling of the match while also requesting additional reports on the incident from the duo who did not provide it in their post-match reports handed to the continent’s football governing body as is supposed to be the norm.

The Times of Swaziland revealed that National Football Association of Swaziland chief executive, Frederick Mngomezulu, acknowledged receipt of communication related to the suspension of the two match officials from the CAF office in Cairo, Egypt.

Sibandze was only promoted to handle his first international assignment when he took charge of the 2017 CAF Champions League qualifier between Ferroviario de Beira of Mozambique and Zimamoto of Zanzibar on February 19.

Two years ago, he was recommended for a FIFA badge by the Swazi authorities, but of the five names forwarded to the world football governing body, he was the only one who was rejected by the Zurich-based organisation.The Herald

Mukamba out of Rhinos clash