From the centre stage of Islington’s prestigious O2 arena to the heart of one of the biggest theatre venues in the UK, Farai and the Forest Dawn (FFD) have joined the hub for real artists from a diverse array of countries after performing at the famous Rich Mix theatre on Saturday. 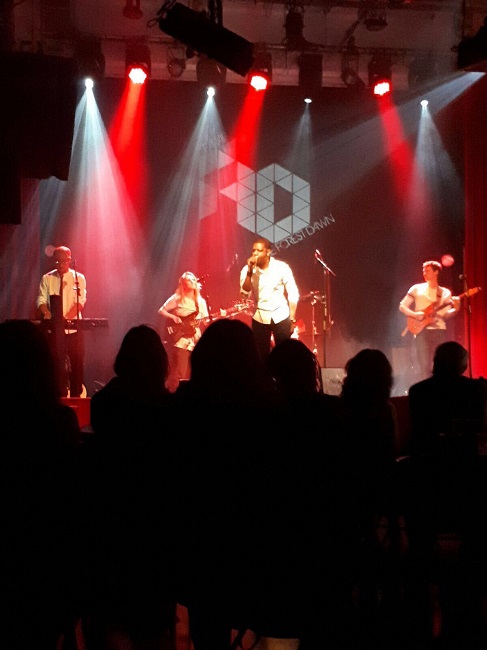 The well attended gig explored a journey from Zimbabwe to London via Tanzania with support from talented act Kihaya Blues.

Known by fans as FFD, the band have been playing regular shows in and out of London for the past four years, and recently made their Northern debut performing at the Great Bridlington Seafood Festival.

Last July, the band released their highly anticipated single and music video, Til Death Do Us Part which has received some positive reviews to date.

All set for Zimfest London 2015

The feel-good love track, produced by Jonathan Morris (J-Fills) followed on from their successful hit Beautiful released in 2015.

Lead vocalist Muvuti said, the band were extremely thrilled to have gotten the opportunity to perform on a stage that has been shared by the likes of U2, Coldplay and the Killers.

“Our performance at Rich Mix was a demonstration of where we are artistically, and the journey we are headed on as a band. It gave us the opportunity to have a production setup that matched our ambition,” Muvuti said.

“Our cultural diversity as a band has allowed us to represent our roots through music. It has allowed us to demonstrate that when African music is converged with a diverse sound that includes pop, rock and soul, it creates a universal energy that people can easily buy into and, the venue allowed us to articulate all that efficiently,” Muvuti added.

The band was this year sponsored by the Health Equity Exchange (HEE) in conjunction with the Focus Organization. Focus is a group of dynamic London-based music promoters that bring together international musicians – afrobeat, soukous, ska, hiphop and reggae artists – to create a series of culturally enriching events, putting the spotlight on music from the African diaspora and edutainment through the arts.

The HEE CEO, Dana Handy said that her team were really happy to sponsor Farai and the Forest Dawn.

“We find them inspiring hence our endorsement. When we met with Farai and the team they exuded a great work ethic and that is what we embody. It did help as well that they were infectious and extremely talented,” she added.

Once a vast leather factory, 35-47 Bethnal Green Road where the heart of Rich Mix is, was transformed into a multi-arts venue. Stretched over five floors it has a three screen cinema showing the latest releases and every year takes part in a number of independent film festivals. There is also a multitude of flexible performance spaces where emerging and established artists perform.

Farai and the Forest Dawn (FFD) emerged in 2013 with a retro-soul and rich melodic sound.

The band’s infectious energy won over the hearts of the British public when they entered one of London’s biggest pop/rock competitions, Be on the Scene – Battle of the Bands, beating 80 bands over 15 weeks to be crowned winners.

There are plans to host another Come Up Season (CUSP) concert at another O2 arena in the coming months. CUSP which has been dubbed as the first artist-owned independent platform for artists, by artists is a part of a wider campaign for independent artists to take ownership and responsibility for where they play and how they get their music out to the world. Last year the band hosted their first gig at the O2 in Islington, alongside Afro Jazz artist Chashe and budding Comedian Munashe, among others.

The band is about to release their new single Can You Help Me, and a date will be announced soon.Their last single Til Death Do Us Part is available digitally from all major online stores. There is also talk of an album, scheduled for next year.

Farai and The Forest DawnJonathan Morris

All set for Zimfest London 2015