We meet in the context of two developments that have shaken our country and greatly disturbed the spirits of the people of Zimbabwe. 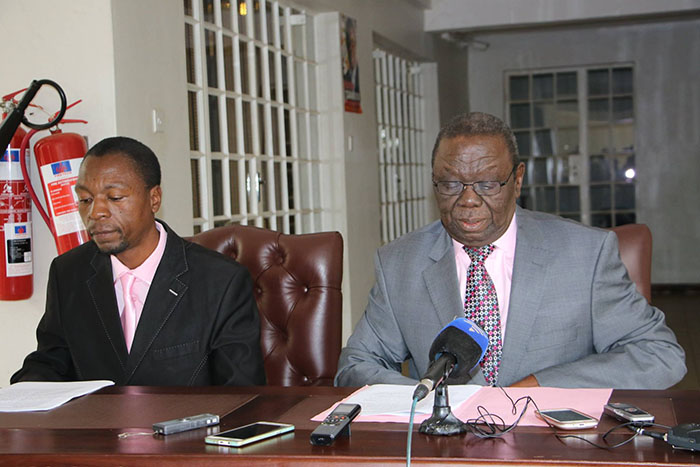 The first is my health condition which I disclosed to the people on the 27th of June 2016. I want to say today that I am recovering well and once again, I want to thank everyone, especially the people of this country from across the political, religious and tribal divide, for standing by me.

Indeed, we are all mortal beings and sometimes our bodies get shaken by the vagaries of nature but as you can see, God is always on our side and I am on the path to full recovery.

The second issue is the acute deterioration of the economic situation that is fast accelerating towards a full-fledged implosion. The nation is hurting and life is tough for everyone outside the parasitic elite that is feeding on the national trough. 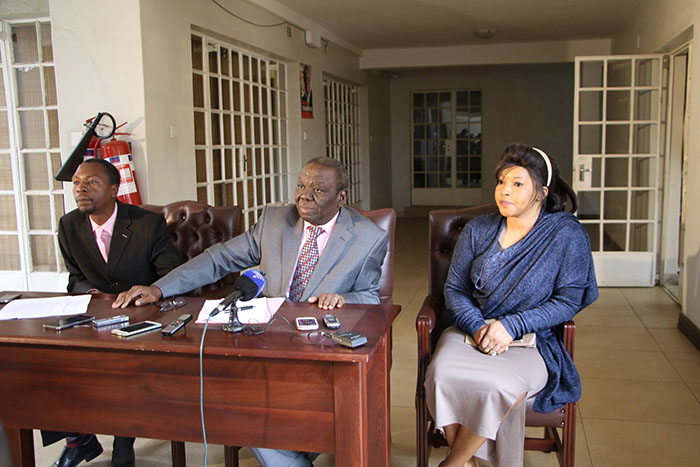 It is this elite that is fuelling the cancer of corruption and is oblivious to the dire situation facing the ordinary people in Pumula, Plumtree, Mufakose, Dotito and Chirundu. Oh yes, corruption, mis-governance and just plain cluelessness at the national level have become a more dangerous cancer, even more dangerous than cancer of the colon!

The MDC national executive and national council met for nine hours yesterday to discuss the worsening situation in the country and to chart a way forward that would create a better life for the people of Zimbabwe.

The party welcomes the emerging national consensus where other civic groups and ordinary citizens are now joining us on demonstrations and protests as a legitimate and constitutional avenue of public expression.

We have a Congress resolution that as a party we shall embark upon on and support every group and sector that will go into the streets to legitimately express its concerns and petition this government to address its genuine grievances.

It is a matter of public record that on the 14th of April 2016, our structures in Harare embarked on a peaceful demonstration against this government, which was followed by similar successful protest marches in Bulawayo and Mutare. As I have said, we are happy that others have taken this route as a legitimate expression of national displeasure at how the country is being mismanaged.

It is in this context that I want to laud Pastor Evan Mawarire, the Tajamuka pressure group and the ordinary citizens of this country in Beitbridge and elsewhere who continue to send a loud message to this regime that the nation is now fed up. Our colleagues in the struggle need to be lauded and commended for their positive effort.

Indeed, we heartily welcome them to the struggle, which I assure you will never be a crowded arena. At our meetings yesterday, the MDC executive organs welcomed the national convergence that is emerging in our troubled country where all players are now agreed that the way forward is to put pressure on this illegitimate regime.

We have indeed become a big tent of patriotic Zimbabweans singing the same chorus from different social stations. That should be commended.

The party’s national council was unequivocal in its resolution yesterday that President Robert Mugabe and his government must leave office or face popular protests as they have failed to find lasting solutions to the problems facing the people.

To this end, the party resolved yesterday to continue its provincial protest marches while co-coordinating and preparing for robust and comprehensive national action on a date to be announced.

In that national action, we will be rallying the nation and all democratic forces to converge on the national demand that Mugabe and his government must retire. While our provincial demonstrations will continue, the logistics and mechanics for the national action are currently being worked out.

Once bitten twice shy. It is our firm belief that the NTA must not be sculptured as the inclusive government we established seven years ago. The NTA must, by statute, operate parallel to the national executive authority of the country but with a specific mandate. The current regime should be left to deal with its own mess in terms of managing the economy. We cannot and should not make our hands dirty in this area.

The NTA will have a very limited tenure and a specific mandate to, among other things:

(a)Supervise the implementation of the Constitution, including the alignment of laws to the same
(b) Oversee and monitor the work of Commissions such as the Human Rights Commission, National Anti-Corruption Commission, National Peace, Healing and Reconciliation Commission, the Zimbabwe Electoral Commission and others.
(c) Oversee the political reform agenda, some reforms of which are now enshrined in the new Constitution as well as being involved in the preparation for credible elections.
(d) Oversee and monitor food aid and distribution
(e) Develop a shared National Vision and economic reconstruction programme. Our country needs its own Marshal Plan
The broad mandate of the NTA will be to steer the country on a path towards the return to legitimacy through truly free, fair and credible elections whose outcome is not disputed.

Details of the transitional mechanisms including the composition, structure, form, relationship to the State executive, establishment processes, signposts and roadmap to elections will be negotiated with other stakeholders whom I will engage soon on these proposals.. What is important for now is the consideration of the principle of the NTA as a starting point for the country’s return to legitimacy and economic and political recovery.

The country is at a precipice and what is now required is leadership but it is apparent that there is leadership vacuum at national level. As the MDC, we are tabling this as an important starting point for the nation that we love.

I am giving President Mugabe an opportunity to soft land the national crisis. He will have only have himself to blame if citizens take matters in their own hands. The ball in his court. I urge SADC and the AU to provide wise counsel to him. The ball is now in his court.

In line with the directive given to me by the National Council yesterday, I have now appointed Hon. Nelson Chamisa and Hon Elias Mudzuri as Vice Presidents of the party. The two will join Hon. Thokozani Khupe in assisting me in the execution of my responsibilities and preparing the party for the next election.

Lastly, we as a party are heartened by the convergence on action as a legitimate and constitutional pressure point on this regime. We in the MDC had seen this coming.

On the 18th of August 2014, I wrote the first of my two letters to all SADC Heads of State in which I warned the region that the citizens of this country would soon be taking matters in their own hands in bringing this regime to account. The recent legitimate protests by Zimbabweans vindicate my communication to the region.

However, beyond protests and demonstrations, there is need for leadership and the sculpting of a coherent, durable plan which we hereby lay on the table as a party. We have no other country except Zimbabwe. We urge all Zimbabweans to rally together in demanding a better deal for us as citizens than our current sorry plight.