The Students Solidarity Trust, a non-governmental organization working with students in institutions of tertiary learning in the country is disturbed by an article that appeared on the cover page of the Weekend Post (November 22-28) to the effect that students at Midlands State University are charging $2 for sex. 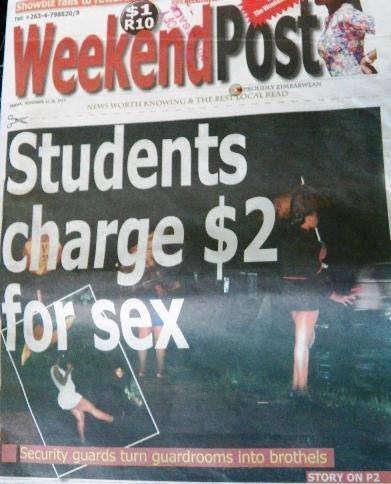 Whilst it is a fact that prostitution is the oldest profession in our society and that in most cases female students can be driven into it because of biting poverty and unemployment we believe that the author of this story did not do his homework well in coming up with the article.

The article is just made up of the head line and what follows is more of sensational trash that is meant to induce a sense of shock, alarm and despondency to the students’ community at the Midlands State University and above all trigger anxiety on all the parents of the female students at this institution.

These female students from Midlands State University (MSU) will face serious challenges when looking for internship and work after this article’s portrayal of them as generous sex workers.

The article only mentions an interview with “an unidentified self-confessed commercial sex worker” who was bitter when asked about the issues of converting business premises into brothels and there is no mention of a suspected female student being interviewed yet the article is about students allegedly charging $2 for sex.

At this rate and with this kind of unethical journalism female students at MSU who love to go out after lectures especially on Fridays will find it very difficult to do so for fear of being labelled cheap prostitutes out to make ends meet by trying to survive on immoral earnings.

The SST respects the media as the vital fourth arm of the state whose role is to report it as it is, in a fair and unbiased manor after doing the necessary verifications so as not to succumb to the evil temptations of abusing the media for selfish ends and economic gain. This article will no doubt leave an indelible mark on all the female students from MSU as they will all be branded as cheap prostitutes in all their future endeavours which include marriage.

The SST is going to join hands with all organizations that work directly with students in institutions of tertiary learning in the country in seeking a retraction of this irresponsible article whose intention has been to cause more harm than good in not only the academic fraternity but also in Zimbabwe as a whole.

Silence of the righteous men

MSU student kills self after father calls him to order