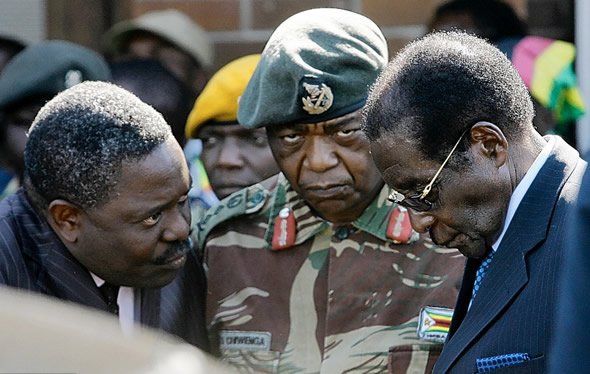 A suspected member of the Central Intelligence Organisation (CIO), who also holds a position in ZANU PF, is allegedly recruiting youths in the Midlands Province and using them to threaten anyone supporting the MDC with death.

A report by the Crisis in Zimbabwe Coalition claims Owen Ncube (also known as Mudha Mugabe) has been steadily re-activating the ZANU PF terror machinery in the area. He has been recruiting youths from the Zhombe and Salagushle resettlement area in Kwekwe and Kana village in Gokwe.

Ncube, who is also the ZANU PF Provincial Secretary for Security in the Midlands, is said to be forcing villagers to attend party rallies against their will. At these rallies the youth militia are recording the names and identification numbers of everyone present as well as taking the names of those who do not attend.

Chamisa is the enemy, says Mudha, declares Zanu-PF must…

‘We are in dire need of ambulances not fire…

Govt cracks whip on Harare City over non-payment of Pomona…

A month before this Ncube “terrorized gold panners at the Sherwood mining area, forcing them to attend ZANU PF meetings every week or face eviction from the mine.” The crisis report also says Ncube was part of a group of senior ZANU PF officials who were sucked into an illegal gold mining scam in Kwekwe.

“Only the residents of Midlands will be allowed to enter the fields and they will do so through ZANU PF structures. Those that are not known within the party will not have access and those from outside the Midlands will not be allowed here,” Ncube said while addressing ZANU PF supporters at the time.

Ncube is also known as a sidekick of Defence Minister Emmerson Mnangagwa. When Mnangagwa lost the Kwekwe Central parliamentary seat to MDC-T candidate Blessing Chebundo, Ncube mobilised a gang of thugs that burnt down Chebundo’s house.

Concern over Zanu-PF blatant vote ‘buying and politicisation’ of chiefs