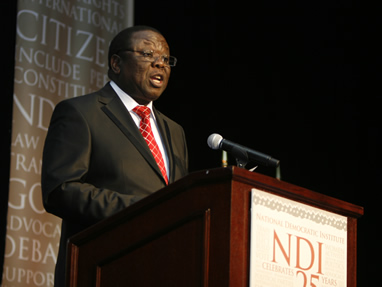 Members of the diplomatic corps,

I want to thank you for inviting me to this forum whose theme is “Unleashing Zimbabwe’s growth potential. ” The theme itself is clear that our potential is on leash and we have to unpack the nature of the leash so that we address those things that have prevented us as a country from moving forward.

There are a lot of people out there who are keen to explore opportunities in our great and beautiful country; a nation endowed with vast resources and a hard-working and committed people.

Investment has a significant impact on economic growth. Zimbabwe can attain high levels of growth if we put in place competitive policies to attract investment. We should equally strive to put in place best international practices which bode well for attracting foreign direct investment.

Ladies and Gentlemen, the formation of the inclusive government gave us the much needed political stability to bring back business confidence and investor interest in the country, which should enable us to unleash our growth potential. So much has been said of the abundant natural resources that our country is bestowed with as well as its hard working citizens.

Unfortunately this has not translated into desired levels of economic growth and investment inflows largely due to policy inconsistencies, unpredictability and mixed messages from the same government.

Zimbabwe’s diamond wealth alone could realise billions of dollars per year if this valuable asset is exploited transparently in line with regional best practices. So far, pretty little has been realised from the sale of diamonds because of the murky manner in which these resources are being mined and sold.

As a government, we have asked for the relevant Ministries and government departments to work together to ensure transparency in the extraction and disposal of this precious national resource.

This is because investment opportunities are enhanced when government begins to create a transparent business environment and this cannot happen when government itself is opaque on its own revenue inflows.

It is all not gloom and doom on the continent. African economies are consistently growing faster than those of any other region of the world. Investment returns are unparalleled, with Zimbabwe ranked in the top 3 FDI destinations with the highest returns according to a recent study by the Economist.

Statistics show that the economies of at least 12 African countries have grown by more than 6% a year in the last few years. The World Bank reports that nine of the 15 countries in the world with the highest rate of recorded 5-year economic growths are in Africa.

This is important because it shows that it is possible to poise our country on a new pedestal of economic growth and development and to join the big boys (or girls) of this continent.

A few years ago, Ethiopia was synonymous with conflict, hunger and famine, but the same country is expected to grow by 7.5% this year, without a drop of oil to export.

The same country is now the world’s tenth-largest producer of livestock.

There has been massive economic revival in Rwanda despite its tortuous and painful national story.

There is renewed hope following the new government of South Sudan, there is some modicum are encouraging signs of stability in the Ivory Coast and a post-conflict Libya could soon settle down after several months of internal conflict.

While we are aware of our challenges, we are also aware of what we need to do in order to set and poise Zimbabwe for growth and investment.

True, the risks in Africa in general are generally high, but the high risks are aptly compensated by equally high returns.

While ICTs are the biggest growing sector in Africa, from 2 per cent in 2002 to 51 percent in 2010, the challenge for Africa in general, and Zimbabwe in particular, remains poor infrastructure such as road networks, mixed messages and our appetite to shoot ourselves in the foot.

I had a meeting only yesterday with the Ministers of Tourism and Environment and Natural Resources. Surely, the invasion of the Save Valley conservancy is a set-back at a time when are preparing to host a world tourism summit.

It sends the wrong signal at a time we want to unleash our growth potential, as suggested in the theme of today’s forum.

We have many opportunities in mining, agriculture, tourism and manufacturing and our quest to attract investment has been marred by our bad politics.

Right now, we are unnecessarily bickering over a new Constitution that we have already agreed when we should in fact move to the next steps so that we create a predictable political environment. In this brave 21st century, economic considerations for the benefit of the country should take precedence over politics.

My vision for Zimbabwe is a place where a credible and legitimate government would be able to address the issues of key enablers such as ICTs, energy, road, rail and air transport systems.

We will have to build a strong economy, use market principles with safety nets and targeted policies in the context of a developmental state to promote economic and social justice and to provide jobs and uplift the people.

Our abundant resources will not mean anything as long as millions of our people, especially the youth, are not employed.

My experience as Prime Minister of Zimbabwe is that peace is a key factor for investment. That is I believe that we must create an environment of peace in the country. As leaders of political parties, we have made our position known that we want peace in the country and I urge everyone in Zimbabwe to take heed of our statements as political leaders in this country.

That is why I urge all of you gathered here to support the call for peace and a free and fair election in Zimbabwe.

Only a legitimately elected government, and not an uneasy coalition, can develop and implement a common vision and economic programmes that will deal with poverty and our high and unsustainable unemployment levels.

Our country requires a break from the past; coupled with a clear programme underpinned by political and economic reforms, a real transformative agenda where individual effort is rewarded but where the common good takes precedence of personal glory and personal gain.

The immediate challenge for any new government in Zimbabwe would be embarking on an aggressive programme of infrastructure rehabilitation, resuscitation of our manufacturing potential and increasing our mining and agricultural productivity.

Government, business and labour should work in unison in policy formulation. Every stakeholder should play their part to ensure that we lay the foundation for the economic prosperity of the people of Zimbabwe and not the prosperity of political parties or individuals.

Ladies and gentlemen, I am glad to note that there has been a marked improvement in the doing business environment in Zimbabwe with the launch of the One Stop Shop Investment Centre by the Ministry of Economic Planning and Investment Promotion in December last year.

This launch marked a giant step towards realising our shared vision of continually reforming the investment climate for the benefit of the would-be investor as well as keeping pace with international best practice.

On our part, we need to make sure that we consolidate the good things we have done so far to make ourselves an attractive investment destination.

We have to ensure that Zimbabwe is peaceful and free from violence; that we maintain peace and stability; that we respect the rule of law and that we honour the BIPPAS we have signed. We are not there yet, but I can assure you, we will reclaim our rightful place as the bread-basket of SADC and a natural destination for investment.

I have utmost faith in this country and its people and I know that the transformation we all desire will happen well within our lifetime.