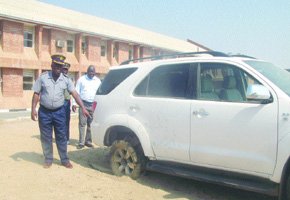 Police in Beitbridge have smashed a well-orchestrated car smuggling syndicate involving Malawians and recovered five top of the range vehicles worth R4 million. The cars were being smuggled from South Africa into the country through an illegal crossing point along the Limpopo River.

Seven suspects have been arrested in and around Beitbridge town in an operation dubbed Ibvani Madini (Get out of the Waters) between Wednesday night and Monday morning. The on-going operation involves the police border control, mounted, support, dog section and CID units.

Police recovered one of the vehicles following a shootout with the suspect near Bubi Village along the Beitbridge Masvingo road. The smuggled vehicles included two Toyota Fortuners, one Nissan Navara, Toyota Raider and a Toyota Vigo all worth R4 million.

Police arrest thousands for not wearing masks in South…

South African Police have confirmed that four cars have been stolen from Durban, while another Fortuner was stolen in Limpopo Province. The officer commanding police in Beitbridge District, Chief Superintendent Lawrence Chinhengo said intensive investigations were still in progress.

He said they had since engaged Interpol to conduct investigations over the vehicles market in Malawi. Chief Supt Chinhengo said the cars would be driven across Zimbabwe using fake registration books, vehicle identification documents, fake temporary import permits and ignition keys.

“We have started conducting joint patrols with our South African counterparts in a bid to restore sanity along the boundary line,” he said. The suspects are: Aboo Benelo Jussab (31), Lee Shas Ajiba (29), Joe Khalid Kazembe (34), Collins Musa (35), Jali Mwsifa (32), Mohammed Idrus Laudon (28) and Juma Afiki (34) all from Malawi.

He said they had also taken in another Beitbridge based Malawian, Abdul Akasimu, whom police were using as a state witness. Chief Supt Chinhengo said the suspects were being charged with theft of a motor vehicle and also contravening a section of the Customs and Excise Act (Smuggling).

“Preliminary investigations indicate that the suspects had been working in cahoots with employees of various vehicle tracking companies in South Africa. They would quickly dismantle the tracking devices soon after stealing the cars. We have since established that most of the cars had their tracking devices dismantled or tampered with.

The first car, a Toyota Fortuner, was recovered on Wednesday last week in the midst of the Limpopo River at an illegal crossing point near Panda Mine area. The suspects were on their way to Zimbabwe en-route to Malawi.

“We laid an ambush on a road leading to the river and reacted when we saw a Toyota Fortuner that was being smuggled into the country in the midst of the river.

“The suspects tried to drive back upon realising that they had been ambushed by the police, but they got stuck in the sand. Collins Musa, Jali Mwsifa and Mohammed Idrus Laudon were in turn arrested and the car was subsequently recovered.

“During interrogations they revealed that four more cars would come through the same route in a few days. We then sealed key and feeder roads leading to major cities in a bid to intercept them.”

The second batch of cars was recovered on Monday morning at around 3 am at Lutumba Business centre. “A Nissan Navara that was being driven by Joe Khalid Kazembe and a Toyota Vigo driven by Lee Shas Ajiba were recovered at the road block.

“Aboo Benelo Jussab who was driving a Toyota Fortuner decided to speed off. Unbeknown to him we had mounted another roadblock at Bubi Village. He was instructed to stop by our armed details but he pretended to be stopping before trying to speed off. We then shot the car’s rear right wheel forcing him to stop and he was subsequently arrested.” The Herald