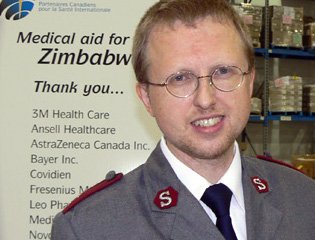 Police intervened after the demonstrators allegedly turned violent and damaged a Nissan Harbody truck belonging to the Salvation Army’s Territorial Commander Venice Chigariro. Repeated efforts to contact Chigariro were fruitless as her mobile phone was switched off the whole day yesterday.

However, Salvation Army sources told NewsDay Thistle had been targeted for reportedly questioning the misuse of funds sourced from well-wishers in Canada.

When NewsDay visited the institution yesterday, scores of angry villagers could be seen milling around after they defied police orders to vacate the premises. The villagers claimed Thistle was helpful to the community but had been unfairly dismissed for questioning the misuse of some medical drugs he had personally sourced from his native country.

Teargas-throwing cops to be charged — Matanga

The villagers have sought the intervention of Mashonaland Central governor Martin Dinha to reverse Thistle’s dismissal. Dinha is expected to address the villagers today.

“He (Thistle) is the man behind everything concerning health for people, he is apolitical and we will continue the fight to protect him from the corrupt people,” one of the demonstrators, Evelyn Murangandi, said.

“He is even buying shoes and helping us through his connections with the donor community to source for medical drugs and we will forever be grateful to him, that’s why we will defend him.”

The wrangle, which started last month, has reportedly stalled operations at the hospital with some critically-ill patients being referred to Karanda Mission Hospital in Mt Darwin or Parirenyatwa Hospital in Harare. NewsDay

Teargas-throwing cops to be charged — Matanga