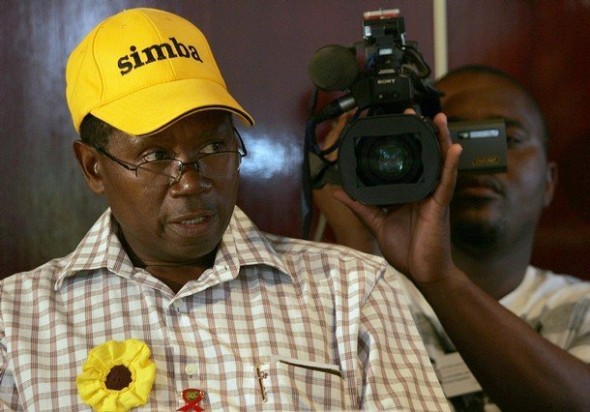 Former Zanu-PF Politburo member Dr Simba Makoni has said that sanctions imposed on Zimbabwe by the US were not affecting ordinary people.

Dr Makoni, who is now the interim leader of Mavambo, also said the current indigenisation laws discriminated against whites, adding that the indigenisation programme has disempowered communal farmers.

In an interview with the Zanu PF controlled Sunday Mail newspaper last Thursday, Dr Makoni said the sanctions imposed on the country were only targeted at a few individuals.

“What sanctions? The travel ban on President Mugabe? And the freezing of assets, whatever they are? Do you know that today, all the platinum we are producing is being sold to the West?

“About 70 percent of the tobacco that we produce is being sold to Philip Morris and other Western countries? The little horticulture products that we still can produce are going to Amsterdam?

“The few goods that we manufacture, such as shirts, we sell to Germany, America and other countries. If you look at the statistics of our trade with the EU today, our trade with the US today, it is growing. How could it grow if there were sanctions?” he said.

When pressed to explain whether he was implying that the sanctions, especially Zidera, were just targeted at a few individuals, Dr Makoni asked: “What is Zidera doing to the communal farmers in Chegutu?”

Makoni said Zidera was imposed on Zimbabwe because it had defaulted in its payments to the IMF, the World Bank and the African Development Bank in 1999. “This is the reality,” Dr Makoni said.

“I became Minister of Finance in July 2000. We had defaulted on our payments to the IMF and the World Bank and the African Development Bank, exactly a year earlier in August of 1999.

“And these institutions, of which we are members and President Mugabe says we are full members of these bodies, took resolutions that this creditor has defaulted on his repayment, we are not in a position to continue lending where we are not seeing prospects of being repaid

“We don’t want to tell the truth. Zidera said the directors of the US on the boards of the IMF and the World Bank and the African Development Bank will not support extension of further facilities to Zimbabwe until it has made good of its arrears . . . so why is Zidera imposing sanctions on us?

When he was told that even the MDC, which called for the sanctions, had accepted that sanctions were hurting the ordinary people, he responded: “I don’t mind. Earlier on I spoke about different people having different views. I am discussing facts.

“If you believe I am not discussing facts, go and check because if you read Zidera, it will tell you why the US directors in the boards of these multilateral institutions were instructed not to support the extension of further facilities to Zimbabwe.”

On indigenisation, Dr Makoni said: “I believe that in the 21st century, the notion or concept of indigenous is very difficult to affirm.

“The world is one small village now. Let me bring us back — the definition of indigenous in our current law, if you are white, you are not indigenous, if you are black, you are indigenous. I can simulate for you today, but before I simulate, let me take you to the Zimbabwe Constitution.

“In the preamble of the Constitution, it says Zimbabwe shall be a non-racial country. Let me simulate — there is a family whose forefathers settled at Fort Salisbury in 1896. They have lived here and they are a fifth generation and have become residents of this country.

When he was told that this fifth generation of whites have over decades enjoyed government support due to racial laws that discriminated against blacks and that these fifth generation whites up to this day continue to behave as if they don’t belong, Dr Makoni responded:

“Two wrongs don’t make a right. I would want us to interrogate that assertion. They are X thousands whites in Zimbabwe, I don’t believe all of them behave un-Zimbabwean.

“There are Y million black Zimbabweans; I don’t believe all of them behave Zimbabwean. So that’s my take to the position of whites who behave un-Zimbabwean. We can’t paint every white person with the same brush, particularly in the making of a law. It’s very short-sighted.”

He said the practice of indigenisation as advanced by the Government at the moment ran contrary to his party Mavambo’s value proposition.

“The practice of indigenisation as advanced by our Government at the moment runs contrary to our value proposition in MKD, which is genuine empowerment. Many Zimbabweans have actually been disempowered.