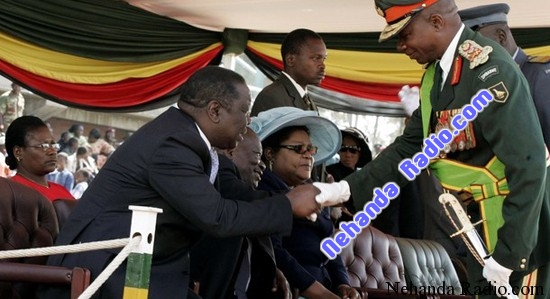 HARARE – Military generals dabbling in politics will be forced to retire if Prime Minister Morgan Tsvangirai wins the next election. Tsvangirai, whose relations with the military top hierarchy is rocky, said this in Bulawayo on Friday.

Tsvangirai warned uniformed forces against meddling in politics. He urged them to stick to their constitutional mandate of safeguarding the nation from external threats.

“I will remove one rotten tomato from the basket so that it does not spoil all other tomatoes,” he said while addressing civic organisations and church leaders in the country’s second biggest city. They had asked him about the worrying trend of military generals making public comments about elections.

The groups were concerned that the generals, by declaring that they will not support or allow anyone other than Mugabe or a liberation war veteran to take over the presidency, were effectively threatening a coup ahead of elections.

The generals’ statements have also raised fears of a return to the instability of the 2008 disputed elections when military commanders took charge of Mugabe’s re-election campaign. The church and civic leaders wanted assurances from Tsvangirai that the military would be kept in check when elections are held.

The army generals have continued with their public statements despite regional Sadc leaders also warning that such behaviour undermined democracy and put Zimbabwe at risk of volatility. Tsvangirai said soldiers should concentrate on their core role and desist from interfering in other people’s duties.

“And the uniformed forces must stick to their duties while I, as a politician, stick to my constitutional duty to the nation,” he said. Tsvangirai told journalists at a press conference on the same day that Mugabe’s comments about elections being held this year were empty.

He described the demand for elections this year as a pipe dream by Zanu PF because an elections roadmap that stipulates electoral, media and security sector reforms as agreed by coalition partners and endorsed by regional Sadc leaders, remained unimplemented.

“Elections are process driven. They should be guided by satisfactory implementation of media reforms and electoral reforms and the way forward depends on a new constitution which will guarantee a peaceful transfer of power,” he said.

He said a draft of the new constitution will be available next week after being delayed by more than a year due to political bickering and funding problems. Tsvangirai added he remained unfazed by reports of defections from his party in Bulawayo.

“We are a democratic party and it is a democratic right for every individual to choose which party to belong to. There have been defections to our party but should we then parade those that opt to join us each time someone does so?” the PM asked. Daily News