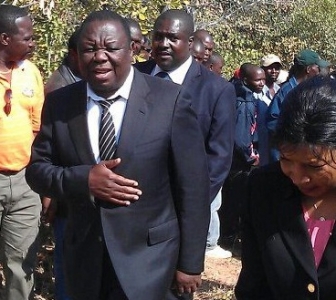 Prime Minister Morgan Tsvangirai has revealed that SADC leaders on Friday expressed shock that there was still politically motivated violence and murder in Zimbabwe and this lead to a discussion of events surrounding the death of MDC-T official, Cephas Magura in Mudzi last week.

Tsvangirai was addressing thousands of party supporters at Botso Village in Mudzi North at the burial of Magura, the MDC-T Ward 1 chairperson for Mudzi North who was murdered by known Zanu PF officials at Chimukoko Business Centre.

“The issue of Magura’s death came up for discussion and most SADC leaders were shocked that this was still happening in Zimbabwe at a time when some political leaders are screaming for elections,” Tsvangirai said.

President Robert Mugabe was dumped by his closest regional “friends” during last week’s Sadc summit as they told him no elections would be held in Zimbabwe until all reforms are resolved. Mugabe returned home during the weekend a humiliated man after his plans and push for elections this year were rejected.

‘How long are Zimbabweans going to suffer in…

‘War veterans now a laughing stock due to…

Tsvangirai said he was very concerned that the MDC-T had lost many supporters as a result of violence perpetrated by Zanu PF and State security agents across the country since the formation of the party in 1999.

“Magura is a hero who died a heinous death at the hands of Zanu PF thugs. We demand that all those fingered in his death must face the full wrath of the law. It is very painful for us as a party to accept that we have lost many such party carders since the formation of the MDC in 1999.”

Tsvangirai expressed shock that despite the 32 years of violence the people of Mudzi had experienced at the hands of Zanu PF, there is nothing to show in terms of development save for graves, wounds and broken limps.

He said as the MDC leader, he would spearhead the formation of a fund to look after the orphans, widowers and widows of those who died in the struggle for a new Zimbabwe.

“The fund will enable Magura’s children to continue going to school.  If I ignore them, I will be irresponsible.  We will continue to assist the Magura family,” he said.

He said personally, he had survived numerous attempts on his life and was alive because God loves his people and he has a plan for them.

“God loved me and ensured that I would not die until the time comes.  Some of us could have died a long time ago but God loves us and has a plan for us.  And if that plan is not achieved, the main actor will not die and the film will not end,” he said.

Full text of communiqué from SADC Summit in Angola

‘How long are Zimbabweans going to suffer in silence?’ – Clive…