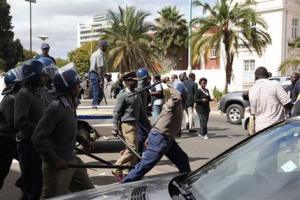 About 200 demonstrators gathered outside the High Court in downtown Harare to protest charges being brought against 29 activists of the former opposition appearing there for a bail hearing. The activists are seeking bail on charges of murdering a police officer a year ago.

Protesters also scuffled with police, witnesses said. There were no immediate reports of injuries or arrests. The detained suspects are accused of killing a policeman outside a bar in western Harare in May 2011. Repeated demands for bail have been refused.

‘Our choice not to be violent must not be mistaken for…

In March, seven policemen were granted $50 bail each just one month after their arrest over the murder of a mine worker north of Harare. The former opposition Movement for Democratic Change accused the court that freed the policeman of bias.

Several people were injured when the police raided a settlement at a mine near Shamva, 80 kilometers (50 miles) from Harare, during an investigation into the alleged theft of $1 and a cell phone from the wife of one officer.

Also on Monday, a group monitoring violence and disputes affecting the coalition described the May 27 killing of a senior Tsvangirai party official at Mudzi in eastern Zimbabwe as a “dark deed” of political violence.

Witnesses to that incident said the official who had been addressing a rally of his supporters was stoned to death by a mob of Mugabe loyalists holding a rival party meeting nearby. The Joint Monitoring and Implementation Committee called on political parties to expel violent members and brand them as criminals.

“Zimbabwe cannot afford to have its image continually soiled through the acts of misguided elements who believe they have the right to kill in order for their views to prevail,” the group said.

Independent human rights groups have reported a surge in political violence and intimidation amid calls for elections within the next few months. Associated Press