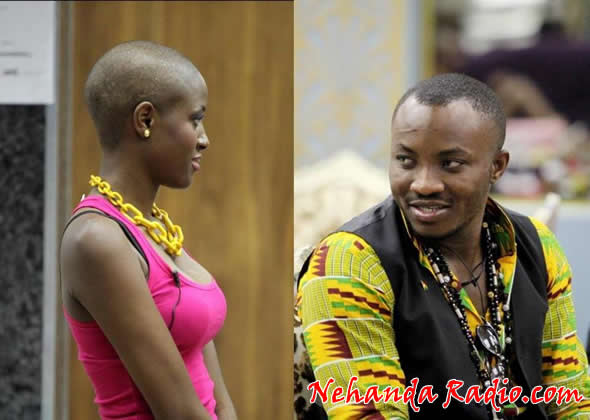 The brawl started after Zainab (26) opened the door while DKB was taking a shower.  Incensed by the move, DKB confronted Zainab and warned her not to open the door while he took a shower.

Instead of saying sorry, Zainab told DKB to go to hell. “What the f***k is wrong with you . . . that’s your own problem,” she screamed.

DKB warned Zainab and that if she repeated the act he would slap her, to which Zainab became provocative and replied by saying: “Slap me now, slap me”.

When DKB walked away Zanaib followed and pushed him before she was slapped in the face and the brawl started. Zainab then slapped back and DKB retaliated by slapping her three times.

This is not the first time a housemate has been disqualified from Big Brother show. During the Big Brother All Stars version, Hanington was sent packing after he beat up South African Lerato. His disqualification followed a huge outcry from fans who piled pressure on Big Brother to act on violence.

Although Lerato was not evicted, she was punished for insulting Hanington. This time Big Brother acted swiftly and decided both DKB and Zainab, who was firm favourite of many viewers, should leave the house.

At this rate, will the Zimbabwean housemate and temperamental Roki keep his cool and is he going to learn anything from history? Only time will tell.

Less than a quarter of vehicles licensed in Zim