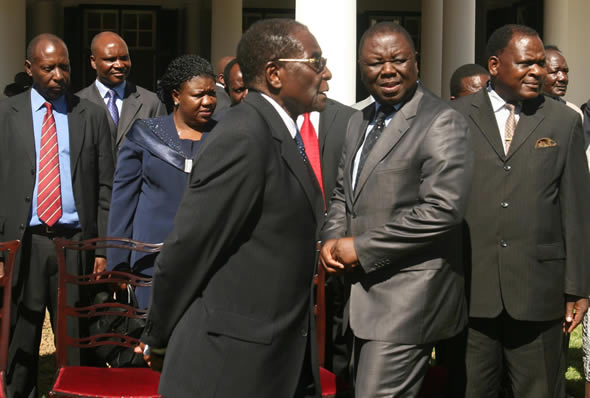 Prime Minister Morgan Tsvangirai’s office says it is aware of “a hatched plot to plant incriminating documents at his Government and party offices as a prelude to pressing criminal charges against him and some members of his party leadership.”

Tsvangirai’s spokesman Luke Tamborinyoka, said the PM has been tipped off that the raid is scheduled to take place in the next two weeks and will result in the discovered documents being used not only to prosecute him and some members of his leadership, but also as an excuse to pull out of the coalition government.

Zanu PF is said to be desperate to go into a chaotic and violent election to boost its chances of victory and the only way it can railroad the country into such an election without democratic reforms is to pull out of the coalition government.

Meanwhile Tsvangirai is said to be instituting the necessary security measures to stem this plot. The history of plots against Tsvangirai is well publicized. Several years ago the Zanu PF regime accused him of plotting to assassinate President Robert Mugabe and arranging a military coup ahead of the March 2002 presidential election.

The regime based its case on evidence from a grainy videotape of a meeting between Tsvangirai and Canadian political consultant Ari Ben Menashe, who became the state’s key witness. Tsvangirai said he had hired Ben Menashe’s firm to help with international lobbying and fundraising for his party.

Tsvangirai was eventually acquitted by High Court judge Paddington Garwe after it turned that Menashe had lied during the trial and that Mugabe’s regime had actually hired his firm to do PR work at the same time as Tsvangirai. Nehanda Radio.com