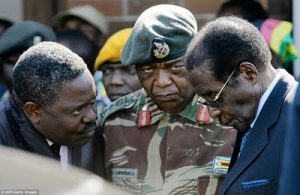 In a spell-binding case, two suspended senior Central Intelligence Organisation (CIO) operatives have dragged the dreaded spy agency to court, demanding re-instatement on the basis that there is no law in Zimbabwe governing the operations of the organisation.

The extremely rare case is likely to re-ignite national debate around the security sector, as well as the desperate need for reforms in these shadowy and much abused structures.

CIO chief administration officer David Nyabando and chief transport officer Ricky Manwere were suspended in 1998 from the spy agency over a Z$17 million fraud that they allegedly committed.

‘How long are Zimbabweans going to suffer in…

‘War veterans now a laughing stock due to…

The CIO alleges that Nyabando and Manwere defrauded the state of cash that was supposed to be used for building “safe houses”. On their part, the two officers insist that they built the safe houses but were pushed out of the spy agency in controversial circumstances.

Nyabando and Manwere were jointly charged with Lovemore Mukandi, the former deputy director-general of the CIO — who was arrested at the airport in September this year after his deportation from Canada. Mukandi has since been freed by the courts.

Mukandi and his boss, Shadreck Chipanga, former Zanu PF MP for Makoni East, were dismissed from the spy agency in 1999. They were replaced by the current director-general Happyton Bonyongwe and Retired Brigadier Elisha Muzonzini, respectively. Bonyongwe is the first respondent in this case.

Following their suspension on October 6, 1998, the spy agency failed to call the officers for a hearing.

The two officers approached the High Court in 2005 seeking a declaratory order that their suspension from duty was unlawful, null and void and that the inordinately long time it had taken authorities to hear their case breached provisions of section 18(9) of the Constitution of Zimbabwe which states that: “Every person is entitled to be afforded a fair hearing within a reasonable time.”

They also want to be re-instated to their posts and be paid all salaries and benefits due to them with effect from the date of suspension. The CIO served the two officers with a convening order on December 25, 2005 stating that a board of inquiry had been set up to look into their allegations.

The two officers turned up with their lawyer Albert Nyikadzino of Musunga and Associates. But the hearing never took place. The two officers’ lawyer subsequently wrote to the CIO bosses again on June 9, 2006 to seek clarity on the matter and was advised that the disciplinary hearing would now take place on July 6, 2006.

The papers also state that Section 113 (10) of the Act clearly states that members of the CIO are not part of the Public Service and cannot be disciplined under any law in Zimbabwe.

The CIO board of inquiry, headed by the director of administration, disagreed and postponed the hearing so that the two officers could make an application to the Supreme Court to ascertain if that was the correct position at law. The Supreme Court, sitting as a constitutional court, concurred that the CIO was not regulated by any Zimbabwean law.

“It is, therefore, clear beyond any doubt that the applicants, being members of the CIO, were not part of the Public Service and were not governed by the Act and the Regulations,” says the October 15, 2007 Supreme Court ruling.

“Accordingly, the disciplinary procedure set out in the regulations did not apply to them. Consequently, the board set up by the CIO, purportedly in terms of the regulations was not covered by the expression ‘other adjudicating authority established by law’ in Section 18(9) of the Constitution, as it was not set up in terms of any law governing the members of the CIO.”

The officers’ lawyer then wrote to the Civil Division of the Attorney General’s Office stating that the effect of the Supreme Court ruling was that the operatives were still in the employ of the spy agency and were supposed to be paid all their salaries and allowances from the date of the suspension.

Despite the unequivocal position at law, the CIO again advised on January 12, 2009 that there was to be another disciplinary board of inquiry that had been scheduled for Chaminuka Building on February 5, 2009.

The CIO officers’ lawyer wrote back stating it was practically impossible for Nyabando and Manwere to be dragged before a disciplinary board of inquiry which is illegally constituted. The two CIO officers then simultaneously turned to the courts again seeking to interdict the spy agency from convening the board of inquiry.

On October 26, 2010, the two officers approached the High Court seeking a final draft order to be re-instated, saying their suspension was null and void and that the CIO was not entitled to hold any inquiry into the alleged acts of misconduct. The CIO director-general, Bonyongwe, delegated his deputy Mernard Muzariri, now late, to sign the opposing affidavit.

The officers’ lawyers then threatened in a letter to the Civil Division of the AG’s Office that the CIO affidavit created a basis for filing criminal charges against what they said was “forging or misrepresentation of the affidavit”. The AG’s office wrote to the CIO on 13 December, 2010, to pursue an out of court settlement.

Instead of pursuing an out of court settlement as advised by the government lawyers, the CIO filed a second set of opposing papers in the High Court, this time the deponent being Muzariri. But again the papers did not bear Muzariri’s signature. The CIO was again advised on January 27 this year, that the papers they had lodged had “forged signatures” as well.

The CIO waited until Muzariri died. After Muzariri died, they filed an application to say they were seeking condonation to allow them time to file a third set of opposing papers. Daily News

Zimbabwe Vigil should consider their position

‘How long are Zimbabweans going to suffer in silence?’ – Clive…