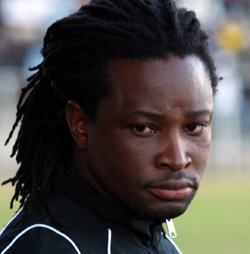 On 16 May 1981, a bouncing baby boy was born in Bulawayo and the Ngwenya  family was naturally happy about the addition to their clan. Like any other child he grew up playing street soccer with his peers not knowing that 19 years later, he would be commanding the right back position at Hwange Football Club.

This is Hlanganani “Angloma” Ngwenya, who had his career cut short by the now Highlanders coach Mkhuphali Masuku when Bosso drew 1-1 with Hwange at the Colliery Stadium on 12 November 2006.

“I still remember that tackle vividly and at first I thought it was nothing serious but lack of proper treatment meant my playing days were cut when I was barely 25 years old and with still many more years to contribute even to my country,” said Ngwenya.

He said at first he found it difficult to forgive Masuku but after realising that it was not a deliberate tackle by the hard tackling Masuku, he let go of that thought. “On the fateful day, Masuku even visited me at the hospital and continued to inquire as to how I was coping,” he said.

Ngwenya, will forever rue the idea of joining Hwange as he claims the company literally abandoned him at the time he needed them most. He claims he was not paid a cent and the company stopped his salary well before he had healed, claiming his contract had expired and up to now his leg still hurts.

Just who is this bitter young man?

Hlanganani grew up in Sizinda suburb in Bulawayo and attended Ntuta Primary School before proceeding to Ihlathi Secondary School. He says he chose football after being inspired by the likes of Tafirenyika Tembo and Fisher Khoza who were playing for the now defunct Bulawayo Bottlers in Division Two.

Like many youngsters he joined one of the  junior teams in the city and played alongside  the likes of former Railstars players Mtewa Masiku, Elson Phiri, Edward Tembo,  Patson Rungisa among others while his usual opponents were the likes of Honour Gombami, Vusa Nyoni, Mkhokheli Dube and Musa Mguni.

“I started playing Premiership Football for Hwange in 2002 where my best friend was Thabani Maphosa and our captain Obert Moyo, especially when Maphosa left to join Highlanders,” said Ngwenya.

“Being a defender, my most difficult opponents were the Caps United fiery duo of Leonard Tsipa and Brian Badza as well as Highlanders’ Thabani Masawi,” said      the proud father of a single daughter, now based in South Africa.

Ngwenya could not single out any coaches he worked under as the best and he says all of them in one way or the other helped groom him into a better player that he was then before that horrific tackle by Masuku, then known as the hardman of local football after Ferdinard Mwachindalo and David Mkandawire, both of AmaZulu.

“I worked under Weekly Mwale, David Phiri, Tavaka Gumbo and Paul Moyo. It was Moyo who picked me up for the provincial squad to play in the Zifa Unity Cup in 2006 but I never got to play,” said Ngwenya, who now holds a  Level Two soccer coaching certificate. The Chronicle