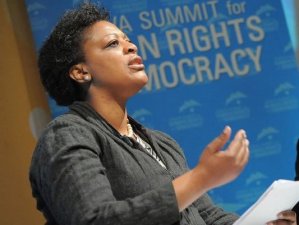 Of gay rights and a sinking titanic in Zimbabwe

Prime Minister and president of the Movement for Democratic Change, Morgan Tsvangirai is a leader in a nation that is diverse; made up of people who have differing religious, cultural and political beliefs.

The recent debate on gay rights in Zimbabwe can best be likened to playing cards on the deck while the Titanic is sinking. Debate on gay rights is not new to Zimbabwe; the homophobic regime of Robert Mugabe has sought to persecute gays and lesbians, just as it has sought to suppress anyone opposed to its misrule –– the righteous men and women of God not being spared.

It is, therefore, demonstrably foolhardy for anyone to run to any quick conclusion which insinuates that our country’s socio-political problems will be resolved by our collective persecution of a tiny minority of gay people, while letting those who constitute the real danger to our national security off the hook.

It only exposes a worrisome trend of intolerance which, if not nipped in the bud while we debate a new democratic, people-centred constitution, to usher us into a new Zimbabwe –– treacherously lead us into retaining the status quo. The Premier came out recently recognising the rights of gays, ostensibly calling on an otherwise conservative society to stop persecuting them.

Tsvangirai’s argument stems from the understanding that the only purpose for which power can be rightfully exercised over any member of a civilised community, against his or her will, is to prevent harm to others, as John Stuart Mill would argue.

The proper interpretation of his proclamations in relation to morality is that the law must only enforce morality to prevent harm to others, but gays’ behaviour certainly harms no one except the participants, hence the law plays a minimal role.

A failure to understand this has led to situations of real human rights violations of gays livelihood in Africa, with some raped, beaten up, or even burnt alive just because of their sexual orientation that harms no one, unlike murder of political opponents.

In this debate we should also be cautious to the fact that Zanu PF is very skilful at dropping the red herring and sending well-meaning citizens like hounds on the wrong trail.

Perhaps it is best for Zimbabweans, as discussions on the new Constitution will undoubtedly provide, to debate this issue with all the wisdom they can summon, religious or otherwise, before settling in on what it is that they really want. Not based out of high emotions, whose fires are otherwise being stocked by some evil entities, with other hidden agendas that have nothing to do with our country or it’s citizens gay or straight.

The excruciating challenge for us as Christians is in our walk of righteousness, and how we respond to our call in building a nation based on justice and equality. For indeed it is written the horn of the righteous shall be exalted above the horn of the wicked Wherein do we derive our righteousness?

For in his presence our righteousness is like filthy rags.

For God hates the sin and not the sinner. It is by his grace that we alcoholics, adulterous, thieves, murderers and our many sins that we are saved, not by our works –– the same gift of grace that even the vilest of despots are also entitled to.

The scriptures again remind us: “for by grace you have been saved through faith; and that not of yourselves, it is the gift of God; not as a result of works that no one should boast.”

Consequently, while the intricate debate on gays and lesbians raged on some real injustice and atrocities were being committed against the people of Zimbabwe, in particular the leadership of the MDC led by Tsvangirai.

Recent days have witnessed escalated persecution of MDC leaders, Solomon Madzore the national youth chairman remains behind bars, his organising secretary, Simangaliso Chikadaya, was last Wednesday night seriously injured after being attacked by Zanu PF thugs in Budiriro, Harare. Chikadaya is recovering from a broken leg and other injuries.

National leaders, including elected Members of Parliament and cabinet ministers, have not been spared either. They are being terrorised left, right and centre, as part of Zanu PF’s new strategy of unashamedly taking and consolidating its campaign of violence to the urban areas.

Residents, retail owners and others, have no reprieve from marauding bands of youth organised under the Chipangano. There is more to be terrified of than lesbians and gays in Zimbabwe, inter alia –– a vile military. Where is the power or authority? Who is running the country?

The three leaders who represent the political entities in the power-sharing Global Political Agreement (GPA), which was supposed to be a road-map to a democratic Zimbabwe, are being rendered obsolete.

Tsvangirai cannot order the police to allow his rallies, or, better still, stop them from stealing food-stuffs bought for his supporters, ailing Mugabe is in and out of the country to Singapore as his health deteriorates, as for Mutambara, he has simply arrived –– the sun has set over his political career.

The only logical conclusion is that behind the scenes are shadowy elements that are illegally running our country. In this vein, if one wants to go further in unpacking the power dynamics within Zanu PF, in the vicious tussle for power, the nature of the latest developments, points us to the faction controlled by a clique strongly linked to the country’s notorious security forces.

The similarity in the methods used against the country’s pro- democracy movement, and those in Zanu PF who have now fallen victim to a system that once fed them –– murder, blackmail, harassment and arrests –– can simply not be discounted. It is an open secret, once safe and vociferous Zanu PF leaders are afraid for their lives.

Consequently, there has been drama and intrigue in the former ruling party. What is clear is that the face of Zanu PF as of November 2011 is so different, say, from the vibrant Zanu PF of 2008, at the height of political competition spurred by the presence of the dynamic MDC on the ground.

The fissures in Zanu PF are clearer, and, by now back then, we would have it with the nauseating campaigns in preparation for their congress, most of the provinces would have come out to unequivocally declare and endorse the ailing Mugabe as their candidate.

Goliath is on his knees. The unresolved death of former retired army general, Solomon Mujuru, the firing from Copac of MP Chindori-Chininga, the weekend arrest of the businessmen, again linked to the Mujuru faction, Simba Mangwende and Farai Rwodzi, and the never ending wrangling in the Zanu PF structures –– all point to that.

The insanity within Zanu PF sadly holds the rest of the nation to ransom, that is the real quandary we are in an entrenched nationalist political party whose collapse is literary taking our country down with it.

Exposing an inherent evil nature of Zanu PF, if they can’t have it, then no-one else will, look at the wanton looting of resources, the glee they have greeted the not so wise decision by the Kimberly Process Certification Scheme to unconditionally sell our diamonds from Marange.

So, for as long as Zanu PF is insecure about its future, the whole country is held hostage, terrorised by a small ruling elite, that wants to continue with the luxury of “eating” or looting our resources like there is no tomorrow.

Dynamos vs Motor Action to be beamed live on SuperSport