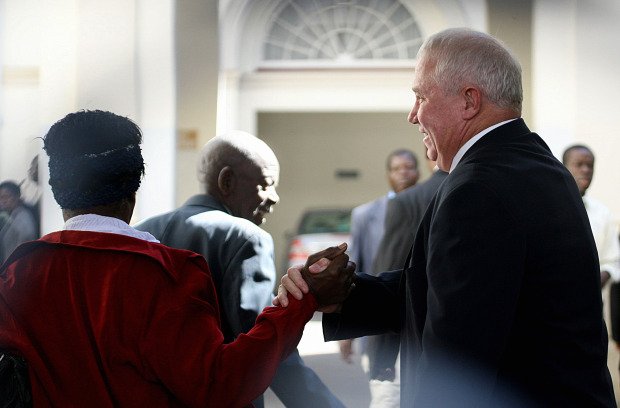 Not that Chinamasa failed to show any bravado while picking himself up from the ruins of his racist political gaffe, but Bennett took the wind out of his sails when the whole House unwittingly gave the last white man standing a reverse standing ovation when they joined in the rumpus.

Bennett gained instant fame for an angry retort expressing his exasperation with the Justice Minister: “Unoda kundijairira iwewe! Unoda kuti ndiite sei? (Don’t think you can get away with trying to take advantage of me! What do you want me to do?). It was a natural response to a demeaning statement belittling the Chimanimani legislator’s ancestors for land theft.

Not only that, he had poked Zanu PF in the face by beating its favoured candidate Munacho Mutezo by a wide margin of over 3 200 votes in a rural constituency long-held to be President Mugabe’s stronghold. Some people have accepted that extraordinary events demand extraordinary measures and that draconian legislation, even detention is a price to pay to defend personal liberties

Roy Leslie Bennett is crusading for justice as much as Luther did, perhaps spurred by his vision in the statement: “From every mountainside, let freedom ring. All Bennett stands for is his rights as a Zimbabwean to be recognized. Roy Bennett, 54, jolted the conscience of many when a show of extreme forms of nationalism by hardliner Chinamasa stretched his tolerance threshold beyond its trading limit.

It is not often that you come across someone thrust onto a pedestal by an unsophisticated rural folk and draws primitive hostility and punishment by a whole party of legislators envious and unable to fathom how a white man can muster such popularity among poor peasants. For his expression of anger in Parliament Bennett was imprisoned for 15 months. On 28 June 2005, he was released from Chikurubi Prison after spending eight months of his twelve-month sentence in custody.

He recounted how he had been made to stand naked in front of prison guards and was then given a prison uniform covered with human excrement when he arrived in jail. Bennett denounced prison conditions generally in a press conference after his release, saying:  “The inhumanity with which the prisoners are treated and their total lack of recourse to any representation or justice combined with the filth and stench of daily life is something I will never forget and I will not rest until their conditions are improved.”

Bennett declared his desire to continue in politics, saying: “I am more determined than ever to continue to strive for a better Zimbabwe for all Zimbabweans, the current oppression cannot continue for much longer and sooner, rather than later, the people will assert their rights.” He also said that if the opportunity arose and the people for Chimanimani asked him to, he would stand as their representative again.

Until the state launched a spirited blitz to demonise him, Bennett says he was driven to oppose Mugabe and his administration as a result of “my community”.  “….we gave each other a commitment (takapana chisungo) that I would remain standing for as long as the community wanted and remained behind me…” Bennett says. Bennett has endeared himself with the villagers that they were able to turn up their noses at a Zanu PF candidate.

When Charleswood Estate was up for sale, in 1992 and after viewing the farm and seeing the agricultural potential, being a Zimbabwean and understanding our culture and the Zanu PF sensitivity around land, Bennett approached the true custodians of the land — the traditional leaders, and requested permission to be allocated the land.

Only after a number of ceremonies had been completed and Bennett was summonsed and informed that he  was one of their children, and after applying to the Government and being granted a Certificate of No Present Interest, did he  purchase Charleswood in 1993. “Together with the workers many who had come with me, we transformed the farm into an Export Processing Zone and were awarded Zimbabwe Coffee Grower of the year in 1996.” Bennett says with pride.

“And on noticing the weeds, traditional leaders asked that my trucks be sent to collect help, 800 people came over a weekend and helped weed the coffee, when I wanted to pay them they refused saying it was ‘Zhunde raMambo’. That cemented the relationship between Pachedu and the community.

“When the area was hit by Cyclone Eline a year later, destroying most of the   infrastructure and communication into the area we worked together using my equipment and resources to rebuild bridges and roads”. The rub came when in 1999 the community leaders and Zanu PF leadership for Chimanimani district headed by Jane Knight approached Pachedu and asked him to stand for Parliament in Chimanimani.

Bennett believes the Zanu PF structures through the people were dissatisfied with the state of affairs in the country and wanted him to get into Zanu PF and Parliament and change things from within to return to the unfulfilled promises from independence. Bennett recounts how together with the community, including the Zanu PF structures debated long and hard that he should stand as an Independent.

“The MDC had been newly formed as opposition, and I was sent to Harare with some other respected community leaders to meet the leadership of MDC,” Bennett recalls.

The group travelled to Harare to meet with MDC President Morgan Tsvangirai and the leadership of the MDC in January 2000, and reported back to our community. Again after a very long debate and discussion that took place right through the night, the community finally agreed that we would approach the MDC and request that Bennett be put forward as a candidate.

When this was confirmed the Zanu PF structures in Chimanimani switched to MDC. During our debate and in conclusion we gave each other a commitment (Takapana Chisungo) that I would remain standing for as long as the community wanted and remained behind me. I have been subjected to relentless persecution, witnessed the most brutal killings beatings destruction and theft of people’s property all politically motivated and driven by Mugabe and Zanu PF.

“It is these acts and culture that drive me to fight for our rights as people, for a society of tolerance and the rule of law where no one ever again can act in such a manner with impunity,” he explains adding: “And of course ‘kanye takapanana chisungo’. (in our community we gave each other a covenant.) Bennett accused President Mugabe of being both vengeful and a racist, “I believe he is afraid of the people and he knows full well that when it comes to the people if I stood next to him and we asked the people, he would suffer the most humiliating defeat ever,” Bennett says.

It is this knowledge and the knowledge that whatever he has done to us has made us stronger and more committed, he hates this as from his rise in Zanu PF to now the only way he has ever, even long before Zimbabwe’s Independence enjoyed support is through violence and fear never through truth and love. To this day the likes of Mnangagwa get on their knee’s when they approach him, the fact that I do not fear him or his goons and that all they have done to us has failed, I believe has incensed him. My relationship with my constituency is one of truth and love, no force or violence involved.

Bennett says judging Zanu PF today, it is possible that this could have been achieved as there are those in the party  who are truly ashamed and would like to distance themselves from the transformation of the people’s party into Zanu PF the peoples killer.

“It is with these people that I would have given the same loyalty and support that I have given the MDC, as this is what the people wanted, however it was not to be, right now as Mugabe gets ready to meet our maker and stand judgement, the jostling for succession is very evident and if those in Zanu PF who respect the peoples will succeed then the hope of Zimbabwe’s transformation and return to sanity is certain,” Bennett says. Daily News