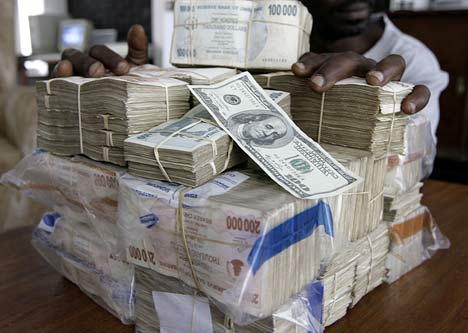 RESERVE Bank Governor Gideon Gono’s proposal this week for the introduction of a gold-backed Zimbabwe dollar is an idea whose time has come. If implemented properly, the gold-backed local currency will resolve the liquidity crisis currently ravaging the sanctions-hit economy.

In light of the global financial crisis and sanctions, Zimbabwe is effectively barred from accessing any meaningful lines of credit and the liquidity crisis will persist if the domestic capital market is not re-activated with the introduction of a local currency backed by a precious metal.

There is no shortage of reasons for the collapse of the Zimbabwe dollar, but it is now universally agreed that quasi-fiscal activities by the central bank and excessive printing of money accelerated the demise of the local currency.

But the country has started to generate meaningful revenues with the Zimbabwe Revenue Authority regularly surpassing revenue collection targets. Previously, the government had been forced to print money to finance everything. This is no longer necessary given the economic recovery and the discovery of diamonds.

Mnangagwa claims Biden treats him better than US Embassy in…

The revenue from diamonds can be used to build the six months import cover and stock up gold reserves to support the Zimbabwe dollar as proposed by the governor. The gold-backed currency is anchored on the premise that the central bank holds a large amount of gold (or other precious metal) in relation to the paper money that they issue. That means if the country doesn’t have any gold reserves, no money can be issued.

This effectively eliminates the normal inflationary pressure that comes from a fiat money system referring to money that has value only because of government regulation or law. Zimbabwe has systematically been excluded from the international credit system, specifically because of the Zimbabwe Democracy and Economic Recovery Act (Zidera) passed by the United States in 2001. The Act makes it illegal for any US national or entity to transact with certain companies or individuals in Zimbabwe.

This affects various institutions such as the World Bank, IMF, International Finance Corporation and African Development Bank where US representatives cannot vote in favour of any credit to Zimbabwe. This creates a huge political risk premium which makes international banks hesitant to grant lines of credit to Zimbabwe and Zimbabwean institutions.

This situation effectively blocks these institutions from doing any meaningful business with Zimbabwe as the country’s political risk is magnified. This lack of access to international credit markets has become very clear throughout the economy with banks failing to grant any medium to long-term loans. This is partly causing the mini-financial crisis rocking Zimbabwe’s banks as they fail to access reasonably-priced funding.

It is widely-reported that banks are lending at 40 to 60% per annum which is way too high an interest rate to give to a legitimate business transaction. This has created a very high default risk and forced banks to avoid lending. This illiquidity needs to be addressed through the introduction of a gold-backed currency. A modern currency is basically paper money backed by the country’s revenue generation capacity and assets.

The United States is the largest holder of gold reserves. How much of this is still in Fort Knox physically and not just on paper is another question as much gold is loaned out. In essence, the US has sold a lot of its gold into the market through gold leasing even though it still shows up on the federal reserve’s books as an asset (accounts receivable).

This partly explains why the US dollar is still the world’s reserve currency since the US holds the largest amounts of gold even though its exact quantity remains a subject of speculation.

In foreign exchange, no major currency is considered to be as safe and stable as the Swiss Franc. The country’s centuries-long policy of political neutrality, as well as the fact that 40% of its currency reserves were previously backed by the precious metal, contribute to the Swiss’s image as “liquid gold”. The proposed gold-backed Zimbabwe dollar can in fact be based on the same model.

Whilst Zimbabwe has huge gold and other mineral reserves, these have been properly leveraged out to create liquidity in the country’s economy. There is need for Zimbabwe to move away from total dependency on a foreign currency whose economy has nothing in common with Zimbabwe’s.

The economy and industry is currently reportedly operating at approximately 45-50% capacity. This is significantly higher than the 10-20% capacity utilisation before the introduction of multiple currencies in 2009. Now the multiple currencies have achieved their intended purpose which was to stabilise the economy.

The next phase, which is growth, requires the use of a softer currency which closely mirrors the country’s macro and micro economic conditions and the US dollar can be used in its traditional sense as a foreign currency but not to permanently replace the Zimbabwe dollar.

Gilbert Muponda is CEO of GMRI Capital. He can be reached at gilbert@gmricapital.com or on Skype: gilbert.muponda

Mnangagwa claims Biden treats him better than US Embassy in Harare