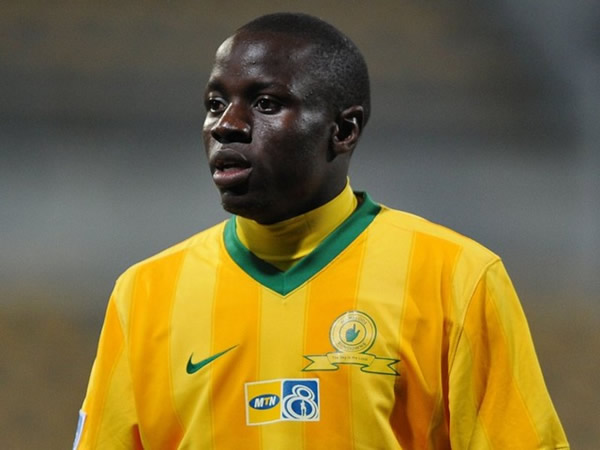 TROTT MOLOTO, the second most powerful man at Mamelodi Sundowns, has hailed Nyasha Mushekwi as a rare and special striker who is set to scale the heights in a football career that promises greatness.

Moloto – who had a stint as Bafana Bafana coach – is now the most trusted lieutenant of Mamelodi Sundowns’ president Patrice Motsepe and was at Barbourfields on Sunday to assess CAPS United striker Simba Sithole. Cash-rich Sundowns, impressed by the impact that Mushekwi has made in his debut season in the Premiership and the possibility that he could be lost to a European team, have already begun scouting for fresh talent from Zimbabwe.

Mushekwi finished his debut season in Super Diski, where he spent time on the bench, with 14 goals as Zimbabwe forwards dominated the Golden Boot race that was won by Knowledge Musona with 15 goals. With Khama Billiart also scoring some key goals for Ajax Cape Town, who finished second in the race, Zimbabwean forwards have been so dominant in Super Diski this season that Bafana Bafana’s World Cup striker Katlego Mphela was pushed into the shade.

Mushekwi nets fastest goal of the season in Chinese Super…

Mamelodi Sundowns loan out Divine Lunga back to Golden…

Mushekwi was signed from CAPS United last year and he came within just one goal of winning his second straight Golden Boot after having won the same award in his last full season on the domestic Premiership. Inevitably Mamelodi Sundowns have come back knocking on the CAPS United door, as they search for fresh attacking talent with no guarantees at the club that Mushekwi and Mphela will be around next season, with their focus now on Sithole.

Moloto, who is the technical supremo in Motsepe’s advisory team, was accompanied on his latest Zimbabwean mission by Harris Choeu, a technical expert at Sundowns who was also involved in the recruitment of Mushekwi, Method Mwanjali and Lionel Mtizwa.

“Nyasha is very special, a rare breed of a striker who is strong on the ground and in the air, and we are happy that he is our player,” said Moloto. “He gets into very good areas and he has good strength, which makes it very difficult for defenders to push him off the ball and once he gets ahead of you, then that’s it. Defenders in South Africa are not comfortable playing against Nyasha and we believe that he is going to get better and better and we are confident that his best is yet to come and he will be a very, very good striker.”

Moloto said they were certain, when they signed Mushekwi, that they had secured the signature of a special player and they were not surprised by the impact that he has made. “When we signed Nyasha, we knew what we wanted and we knew what we had got,” said Moloto. “We had watched him in two games and one of the games was for the Zimbabwe national team against Seychelles and we knew what we were getting. “He hasn’t let us down and he should be better in his second season. He needs to shoot more with his right and if he can do that then there will be more goals.”

Moloto said Sundowns were happy that their investment in Nyasha, Mwanjali and Mtizwa, whose season was blighted by injuries, had brought quality to the team. “It was a good investment because the players have come and made an impact,” said Moloto. “Our relationship with CAPS United is very good and we are always working on trying to improve it. “We are looking at the possibility of helping their coaches, who can come to our team and see how we prepare and see if it can improve their team.”

Moloto and Choeu watched as Sithole dominated the show in the first half in the Castle Lager Premiership tie between CAPS United and Highlanders, where his close control, flicks and clever runs off the ball proved a handful for the Bosso defence. But he missed his team’s two best chances, pushing his effort just wide of the right upright in the first half after stealing a yard on the defence and then flicking the ball over the bar from close range in the second half.

Moloto said although they had been impressed with what they saw, they needed to have another look at Sithole, on a different pitch to the uneven Barbourfields’ surface that appears to have taken a huge toll from the political event held there in recent weeks. The Sundowns team is likely to watch the Zimbabwe Under-23 tie against their South African counterparts, in the All-Africa Games qualifiers, and another big game involving CAPS United as part of their assessment. He said while Sithole’s first touch was good and his movement was excellent, he needed to work on his strength and his aerial command.

The striker, who was named the Castle Lager Premiership Player of the Month for April, is also wanted by Super Diski side Maritzburg United where he underwent trials. Agents representing Kaizer Chiefs have also made enquiries about Sithole’s availability. CAPS United operations director Farai Jere said they were happy that their relationship with Sundowns was growing from strength to strength.

“In this world you need strong bonds with other big clubs and Mamelodi Sundowns are a very successful team and there is a lot that we can learn from them,” said Jere. “One of the issues we are proposing to them is for Sundowns to give us two or three of their most promising young players, because they have a good youth system, whom we can use in our team to give them the competitive edge that comes with game time.

“Such an exchange programme will also see our coaches going to Sundowns for an attachment and we hope that they can learn a lot and, when they come back, it can improve the team. “We have built a solid business relationship with Sundowns, which is built on trust and it goes beyond the buying and selling of players. The Herald

Mamelodi Sundowns loan out Divine Lunga back to Golden Arrows